Yes, I got another stage done tonight after work on my latest unit of 40 Clanrats...
...Ogryn Flesh Wash.

After putting on most of the base colours across the unit, adding washes is usually the next step. A wash adds depth to the model by simulating shadows as the darker wash accumulates in the folds and corners of the model. This contrast helps to give the whole model definition.

Here are the pics of how we finished up tonight. As I only did the skin, it may be a bit difficult to see the difference between today and the painting I did yesterday before washes, so I have put some pics below to show "Before" and "After" adding a wash.. 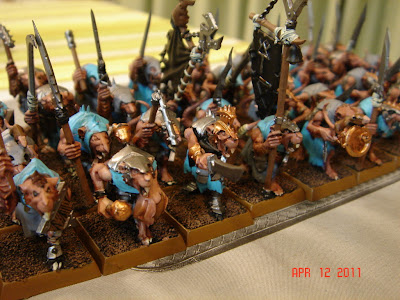 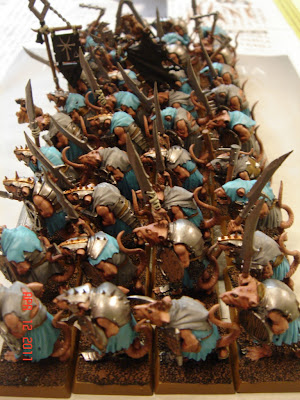 The next step will be a Devlan Mud wash on the armour, robes and metallics to darken things down a bit. When the Devlan mud goes on, it will be very easy to see a difference!

And in other news...(OK, what follows really is the "Big" news) Games Workshop announced by email today something big for July this year:

The link in the email led to the following info...

Storm of Magic - when the eight winds howl...

The Winds of Magic are tumultuous. Drawn by Morrslieb, they are prone to rise from a strong gale into a howling tempest. And when they do no kingdom or realm is safe.

Monsters awaken from their slumber and are summoned from their lairs at the bidding of sorcerous masters. Armies assemble, ready to defend their borders or seize the opportunity to gain limitless power. It is in these desperate times tenuous pacts between wizards and creatures of darkness are sealed to create alliances never thought possible.

A time of doom and great deeds is at hand. Will you rise to meet the storm?

Announcing the impending arrival of Storm of Magic, the latest and largest Expansion for Warhammer, the Game of Fantasy Battles. Launched in July 2011, Storm of Magic describes what happens when great eldritch maelstroms roil across the lands. Magic becomes far more powerful and there is a whole range of Cataclysm spells to cast, unleashing untold devastation on the enemy. Arcane Fulcrums burst from the ground, not only acting as loci for the swirling energies that pervade a battle fought amidst the Storm of Magic, but changing the way a Warhammer tabletop looks and interacts with your armies. With such things so crucial to your Storm of Magic games a new range of Warhammer scenery and Wizards will soon be released in time for you to wage cataclysmic battles.

Then there are the monsters. When the Winds of Magic blow with such strength, the fell creatures of the world gravitate towards the tempest, slithering from deep tunnels or emerging from mountain lairs.

With the new Expansion allowing you to use so many different creatures there are a whole host of new monstrous plastic kits on their way. Citadel's queen of creatures, Trish Carden, has spent the last few years in her own lair preparing for the new monsters to be unleashed upon the world and you can see two brief glimpses of what is to come below:

July is still a few months away; we are in the calm before the storm so now is the time to prepare. Bolster your forces, prepare your regiments and summon your wizards in time for the ultimate war. Keep checking White Dwarf and the website for updates, for when the storm hits nowhere will be safe!