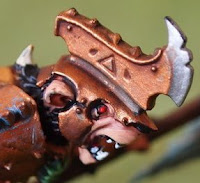 If you are a new Skaven Warlord (like me) you will often find useful articles lurking around the Games Workshop website. Even if you only get a tip or two or an idea for how you want to paint your next Clanrat unit or pointers for your next list these are still a useful read (IMHO).

This month (Feb 2011) has seen the Great Horned Rat favor his children (us) with new models AND several articles on the GW site that will be of interest. Here is a quick round-up of some of the more interesting articles from the last month or two. (Let me know if I have missed any...) Below these I include a couple of older articles that may also be of interest.

Hope this is useful!

Yesses, the Skaven Second Wave of new models goes on sales today, Saturday 15th of Jan, 2011! If you haven't already seen them, I put up some photos when the models were announced, as well as a poll (Thanks to all who voted...) Since I haven't done so officially already, here are the results:


So there you have it, the HPA wins by a (twitching) nose!
...and as luck would have it, I have one! Please see below for an unboxing and some sprue photos... 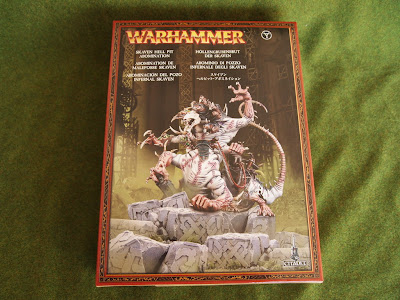 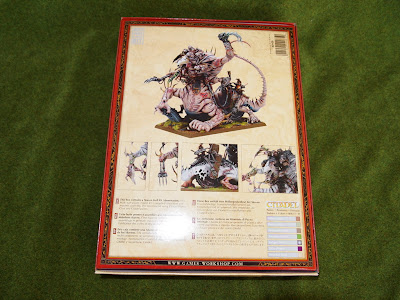 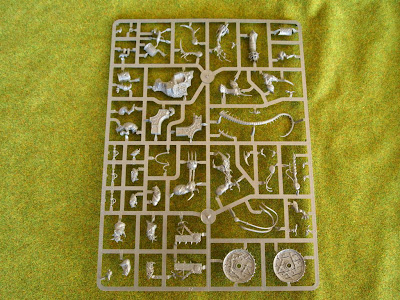 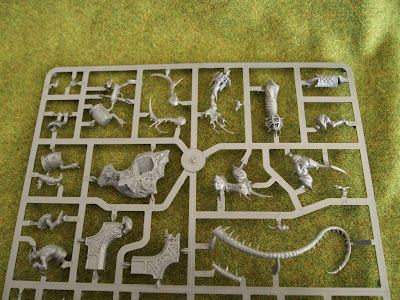 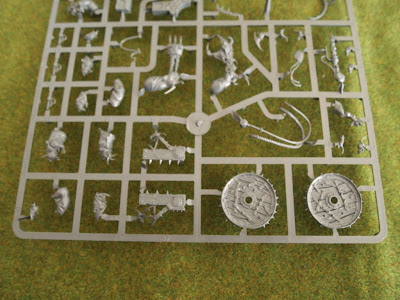 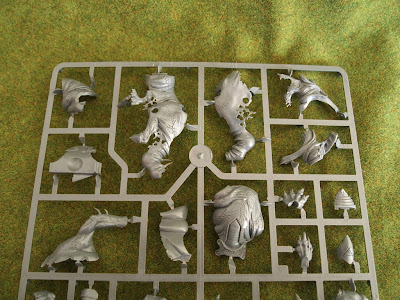 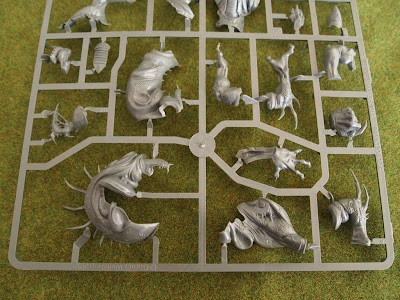 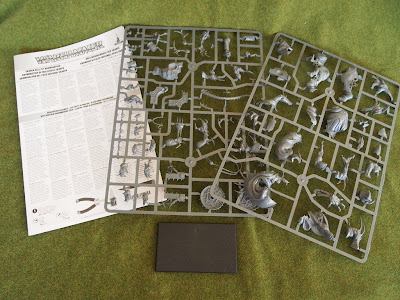 Inside the box are a couple of large sprues, and extensive instruction leaflet ("Remember to always cut away from your fingers") and a large base.
Having taken a few photos, I have a couple of initial reactions.
Firstly, from the instructions and box shots (as well as the photos at Games Workshop) you can see that there a number of options for the jaw, arms and heads. There appear to be eight different heads, of which it looks as though four are freely interchangeable. At first glance, I would agree with some comments on the web that the model doesn't seem to lend itself to modification very much outside of the options I mentioned above. Now, that might seem crazy, because of course having a choice of body parts at all is great, but the potential problem may be the overall body and limb positions don't leave a lot of options to make easy changes due to the moulding. The cool thing about any miniatures painting and assembly is making adjustments to each model. With small models that is pretty easy to do. In this case, I am sure that we will see some very cool conversions soon, but I think that these will probably be done by experienced modelers (i.e. Not me...) at least if significant changes are to be made.  If these are even half-way as good as some of the amazing HPA models that were made before this was released then we are in for a real treat. I'm really looking forward to making this model, but as a beginner, I'm pretty nervous about how well I'll be able to paint it due to those vast areas of skin and flesh.
(I can see myself trying to remove the terrain piece from the front hand and replacing it with some hapless enemy model. That way it looks as though the HPA has someone in it's claws and is about to burst their skull like a grape - hahahaha!)
Secondly, when I saw the pre-release photos from Games Workshop I have to admit that I couldn't see the connection with the Blindwyrm, the dreaded creature that a Hell Pit abomination is supposed to be in part created from. I guess that I was expecting something more..."wormy"?
That is still the case.
While the model does have worm-like qualities these seem to be given mainly by the paint-job used. A very pale colour or white creates the image of something that has lived out of the light, just like a worm in fact. What detracts from this however in this case is the number of limbs and the rat ogre parts - and I guess the size of the limbs. I know the HPA is made by combining rat ogre parts (and others) with the blindwyrm but I guess it is different to my expectations. Having said that, this is going to be a really great addition to my army - but I still want the awesome Scar-Skath model from Maelstrom too (use him as a Vermin Lord...)
Returning to the poll for a minute I was really, REALLY surprised and disappointed to see that so few people liked the Tretch Craventail model. I think it is a fantastic sculpt because it is really different from most other models. The way Tretch is perched on the terrain looks really natural and fits in with his backstory really well too. As I have said before this allows Tretch to have his tail extended - something we don't usually see in other Skaven models (so they can be more easily ranked up probably.) With Tretch on the terrain piece, it almost looks as though it is a "Unit Filler" piece. Points also from me for adding the little rat at the bottom. It is the little details that add a touch of class to a model IMHO. LONG LIVE TRETCH!
...definitely going to pick one of those up!
Anyone got any of the other new release models yet? What are they like?
*Squeek*
Posted by Oddjob at 5:16 PM 4 comments:

Here we are, January 2011, with lots of Skaven left to paint! I thought I would take a few moments to look at how far I have come along with this army since April 24th 2010, the date my first box of Skaven arrived, including a Skaven Battalion.

So where are we now?

Put that all together and there is probably around 2,000 points of Skaven (if adding in equipment choices, magic items etc.)
Still to do...
x1 Plague Furnace/ Doom Bell and Grey Seer
x1 Clanrat unit (x40, Island of Blood)
x1 Skaven Slaves unit (x30)
x1 Stormvermin Unit (x20)
More Rat Ogres (x4, Island of Blood)
x1 Plague Monk Unit (x20)
Plague Censer Bearers (x10 converted plastic Plague Monk models)
...and I still have to put up a step-by-step guide for the Warlord.
(Sigh) as the man things say:
NO REST FOR THE WICKED!
AHAAHAHAHAHAHA!
*Squeek*
Posted by Oddjob at 12:22 AM 8 comments:

Just a quick update today on perhaps the most important addition(s) to my growing Skaven army:
I managed to complete these three models over the last couple of days in anticipation of my first game of WFB this coming Saturday. Why are they so important? Well, knowledgeable players (not me) seem to generally agree that the Warlord is absolutely key because of his leadership. Now, LD 7 may not sound that impressive, but when the rest of your army has some of the worst leadership scores in the game this becomes important!

Here are some pictures of the Warlord and a bit more information for each model. I'll try to add a step-by-step painting guide in the next week or so... 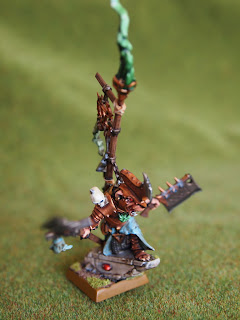 This is the "Tooled-up" Warlord. By this I mean he has his back banner. I had two warlords from buying two Island of Blood sets so I decided to see what the Warlord would look like with and without the enormous back-banner the model has. (You can see the same Warlord model without the back-banner further down the page.)

I was happy to have this chance because as a rule I am not a huge fan of enormous back-banners like this so I wanted to compare the two models side-by-side. I can only imagine that this thing would really just get in the way! (Yes, I know WFB isn't "Real life" so it doesn't matter and I'm aware of the "Sashimono" back-banners that Japanese warriors would wear, but still they Skaven banners just feel too unwieldy.) 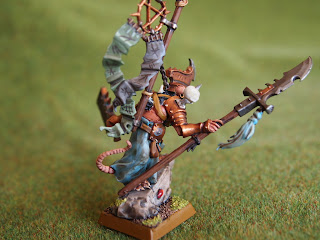 On most of my rank-and-file troops I tend to use Devlan Mud for the whole model just because it is so simple and a real time-saver.For this guy I have used some other washes for (I think) a better effect overall. (Thraka Green on the Warpstone flames, Ogryn Flesh on the skin, Gryphonne Sepia on the ropes.) 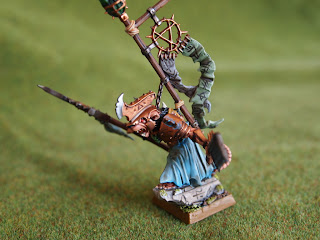 Here is a close-up. It is a bit difficult to make out, but I used an Ice Blue wash on some of the spikes and other brass parts too to help make the brass metals look a bit dirty and add a patina of age. 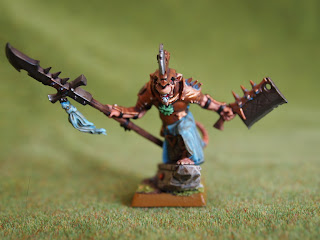 I used exactly the same colour scheme but simply removed the back-banner after assembly. 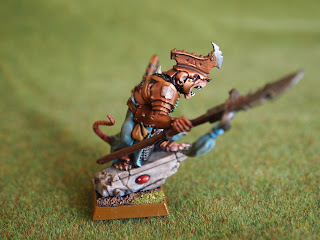 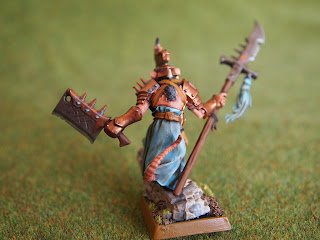 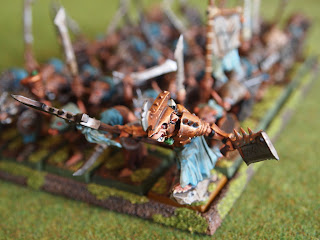 All comments and feedback welcome!

Happy New Year! What are you looking forward to? (POLL) 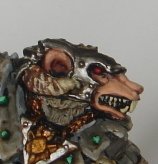 A HAPPY NEW YEAR
to all!
...and
SALUTATIONS!

...First and foremost to the Great Horned One (most mighty of all - shower me with your dark blessings!?)
...to the Council of Thirteen (Oh great ones - impressive in your knowingness...I bow before you...)
...to fellow Warlords, (my wishes for your success on the battlefield against our enemies...)
...to my Chieftains, (rest assured, your loyalty will be rewarded in the months to come...)
...to my Clanrat and StormVermin Captains, (YOUR loyalty may well be rewarded should the Chieftains above fail...)
...and yes, even to you worthless surface dwellers! (although your time for celebration shall be short, for I offer no celebration to my Skaven slaves, which is what you shall become!)

No doubt, as true Skaven, you have all made New Year's promises that you already know aren't worth the Dwarf-skin parchment you have written them on. So, in lieu of asking you what those promises are (a pointless exercise...unworthy of a busy master of Skaven masses such as I) let me instead ask for your opinions and thoughts on something infinitely more of interest to an aspiring Warlord!

"What is your favorite new model in the 2011 Skaven Second Wave of models?"


Please vote in the poll to the right of this post (and which will remain on the top page of this blog for approximately 7 of your man-thing days) and add your comments to the bottom of this post!

To remind you of the new models, I have posted some images below...