Behold - the Skaven Doomwheel...
Perhaps the most devious of the inventions of Clan Skryre and a fearsome sight on the battlefield (even to the Skaven, given how regularly it goes out of control...) After starting on this as a result of a poll held on the site, I finally finished it a couple of days ago.

Here are the steps followed: (Roughly...consuming too much pilfered Bugman's may have affected my memory...and I sometimes do highlights/ drybrushing and washes "out of order" etc.)

EDIT: Following the launch of the latest Citadel Paint range in 2012, please note that the colours listed below are from the previous range. I hope to have time to rewrite in the future, but for the time being, you can use the conversion chart/ list I made here or use the official Citadel Conversion chart here. 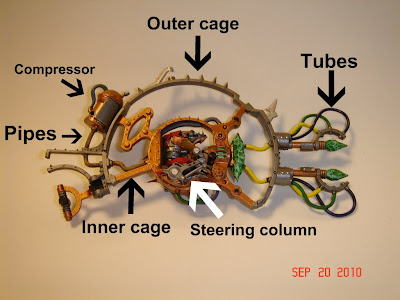 NOTE: All the above was done when the parts were separate, as was the Devlan Mud wash below.

At this point, the model was assembled, but not glued to the base.

6. Base:
Custom Bitz...
Lessons learned?
I attempted a couple of things I haven't tried before - rust and verdigris washes. In both cases I didn't have any professional washes so I used watered down Games Workshop colours. I'm not sure they worked 100%, but I think they achieve the desired effect.
- Definitely test them on a small, out-of-the-way part of the model before using them on a larger surface.
- For the rust, the balance of Calthan Brown to Blazing Orange is tricky - too brown and it looks like mud, too orange and it looks too bright. I found about 25/75 CB to BO to be about right.
- Also, test the consistency of the mix once you have added water. Not enough and it will be like paint and impossible to remove, too watery and you won't get the desired effect. Experimentation is key!

Bases. I should have done the base properly before gluing the model on. The glue and sand was difficult to do with the model in place and I ended up getting it on the Doomwheel and other places I didn't want it to go.

For all that though, I have a Doomwheel to add to my fledgling Skaven force!

All comments and criticism or advice welcome.