The What and Why of Skirmish Games 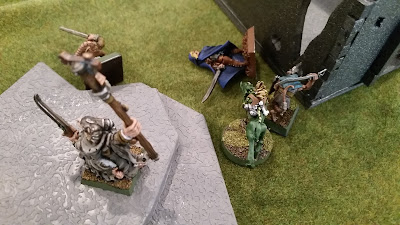 Since getting back into miniatures wargaming a few years ago, I've focused most on "large scale" games like Warhammer 40K and Warhammer Fantasy. I've dabbled a bit with X-Wing, but I have never played a "Skirmish" level game in a fantasy setting.

Until last week, when I got in my first couple of games of Frostgrave.


What is a Skirmish game?

In contrast to fielding "armies", a skirmish game will usually focus on a small-scale action at the individual unit level. Depending on the setting this might be a squad of troops, party of adventurers (6-10) or platoon (perhaps 20 - 30).

I'm a big fan of wargaming, whatever the size of the battle, but my first foray into a skirmish game prompted the following thoughts:

A medium-sized wargame army might cost up to several hundred pounds to purchase new, unpainted models (this cost can be reduced of course by using ebay). A skirmish-sized army will usually cost much less, as you might be looking a just a handful of models. If you are already a wargamer with models from a similar universe (e.g. a fantasy or sci-fi setting), then you probably already have the models you need for yourself and a friend- no further investment in models necessary.
See here for a post on the models I used to make my first Frostgrave Warband.

Also, with less models can come less actions overall per player, significantly speeding up a game (once you have a grasp of the rules).

Some people will say that assembling a large army is the best part (next to using it) but it can be a real chore after a while.
One unit of 30 models? OK.
4 units of 30 models? Challenging!
(As an example, I spent a couple of days putting together some GW Tomb Kinds skeletons...talk about fiddly and infuriating!)

A "horde" army might be 150-200 models (Skaven are a good example). For an amateur, part-time painter (yours truly) who likes to only field painted models, that means hundreds of hours of painting time spread across evening and weekends. A skirmish unit of 10 models is going to be just a tiny fraction of that.

Larger wargames might be played on a 6' x 4' table. Skirmish games can be smaller. Frostgrave plays well on a 3' x 3' or 4' x 4' space. With these smaller dimensions, movement is still important, but there is a good chance that in a short space of time you are going to be stuck into combat.

All this sounds good right?
However there are some potential downsides. The main one IMHO is:

Depending on the setting, you might need to populate your gaming space with lots of scenery and terrain pieces. In Frostgrave, the action takes place in part of an abandoned city. This is a great setting and lots of fun, but it means you need lots of terrain pieces on the table to represent the alleys and spaces in a city.

Take a look at how my first game looked (and this might be called a bit sparse!)
In the above picture, there is a mix of terrain:
Ideally, I would have a gaming mat with a winter city theme...but I guess I will have to wait for that!

This might not be an issue for all gamers. It is worth pointing out that depending on the setting and game, this may not be an issue at all! There are lots and lots of terrain options out there to suit all budgets, from pre-painted to papercraft, to ready to paint. However putting this together if you don't have a good amount of terrain already is either time consuming (possibly negating the saved-time benefits to having a small model count), or expensive, or both.

If you are interested in a Skirmish game, then have a look around. There is probably something available for every possible historical period or fantasy/ scifi setting! I found the rules and dynamics interesting compared to using armies, so in another post, I'll talk specifically about my first impressions of playing Frostgrave.