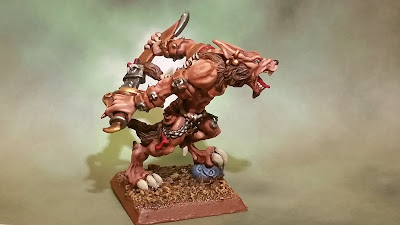 Firstly, some positives to the game that I took away (I've only played two games though, so these might change!) Basically, Frostgrave benefits from all the positives of being a skirmish game. In addition, it has some mechanics that (coming from a background of WH40K and Fantasy) I really came to appreciate over the course of an afternoon.

Remember making a character sheet in your first RPG? This is a similar, but much simplified process. Choose your wizard type and their magic spells, then spend your gold on hiring and apprentice and soldiers for your warband.
Neither my opponent nor I had really got to grips with the wizard types or 80 spells available before the game, but in short order we had playable warbands with 8 magic spells for our wizards that worked quite well, and a selection of expendable underlings to do our bidding die at our behest.

Yes, the humble but iconic D20. What a blast to pick these up again - and you only need two! Rolling these took me back many years to playing D&D in the school library with my friends. As did that sense of horror when I realized that somehow my opponent's green dice was better than my red dice when it came to rolling natural 19's and 20's!
I think his dice must have been made of warpstone...

The combat system is quite simple and elegant. Roll off on a D20, highest score wins AND is also used to resolve damage. There are a variety of modifiers used in combat, but these are quite easy to get to grips with as they are:

Magic is similar to combat. Roll a D20 against the casting difficulty of the spell. Only just failed? Sacrifice some health to boost the spell.

I mentioned earlier that you have access to 80 spells. That isn't QUITE true.
Your wizard has a maximum of 8 spells on their roster. Three chosen from your own discipline, three from an "aligned" school, and two from a neutral school. You don't get access early game to spells from other magic schools. However, this  choice of eight still gives you plenty of room to put a lot of thought into what spells you might take, and how they could complement each other or the rest of your party. The diversity of Wizard types (ten) also means that there is likely to be a type that matches your "style" (Elementalists are good for explosive, ranged magic. Thaumaturges are generally healers and protectors etc.). You'll find the standard fantasy wizard types, but also some more original styles that specialize in manipulating time and other aspects of the world around them.

A small game space well-stocked with buildings, random creatures, fast, dice-based combat, and the prospect of treasure means that we regularly had those "memorable game moments" that make a board game fun.

Take this guy, my nameless rat-man thug ("Thug no.3") in the foreground with the treasure chest:

He is nearly to edge of the table with his treasure, but a random creature - a Werewolf! - comes on via a dice roll, right in the middle of my table edge. Not only that, but the werewolf then moves in a random direction, finally ending up here in the same room as me... what the hell! 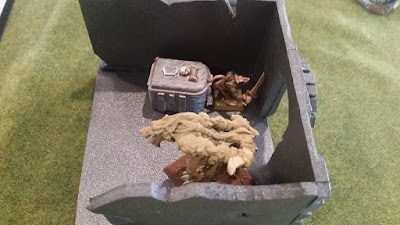 Or,
in combat, my Infantryman becomes a surprising mix of combat god and champion can-opener...
...here you can see him at taking on my opponent's heavily armoured Knight, and slaughtering him while only having a couple of points of health left himself.


Or,
just as my Man-at-arms thinks he has snuck up to some treasure hidden in the old pub...
...the opposing wizard casts his Crumble spell to collapse the elevated walk-way and tumble my soldier to the ground... 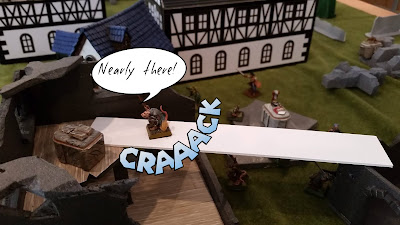 So, lots of positives then. Were there any problems or issues?

Kill, Kill and Kill some more?

Why would that be a problem in a skirmish game?
Well, despite the focus on treasure and retrieving it, in the rules-as-written the last warband standing gets all the treasure that remains on the table. ("The player with figures remaining collects all of the treasure still on the board").
In a standard (non-campaign) game, this seemed to mean for us that it made sense to just try to slaughter everyone else. This negates the need to go after treasure and haul it across the board, especially as by getting the treasure off the board you lose the warband member who was carrying it for the rest of the game.
Sure, the combat was fun, but without that aspect of husbanding your time and team around getting treasure the game felt a bit "empty" and one dimensional.

Also, underlings, apprentices and wizards were dropping like flies in combat! This often came at the hands of a long range spell (Damn you "Bone Dart"!) or a lucky strong hit in melee. Once your wizard was out, you then felt severely restricted. Of course, this should be the case to a certain degree in a game that relies so heavily in the fluff (and field) on the wizards, but I was surprised how fragile everyone was!

To be fair, I think that these issues are specifically solved by playing a campaign game or scenario. You are actively rewarded for keeping your wizard in one piece and stand to gain more for each treasure token you get off the board. Soldiers and wizards also aren't automatically "dead and gone" (there is a chance of this though), but instead suffer injuries that affect their stats.
Alternatively, these problems can also be solved via some house rules, of which there are plenty all over the internet. (I quite like the look of these.)

I'm sure there are other things that will come to mind in future!

Email ThisBlogThis!Share to TwitterShare to FacebookShare to Pinterest
Labels: Frostgrave