Man things, look upon the face of your foe and despair! 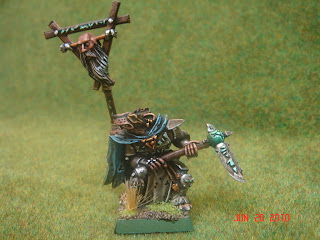 After finishing my first Plague Priest, but not wanting to head back to tackling a big (35+) horde unit just yet, I looked through some of the character models I purchased to see what I should paint next, and came to the Skaven Warlord. This is the model that I would like to use to represent "Squeek Vermintide", the leader of my fledgling Skaven War band.

I like this particular sculpt as there are a number of little details included by the sculptor that give him a bit of character:
- Eye patch! (I reckon he picked that up on his way to becoming Warlord.)
- War Pick (I guess? - two handed so it isn't really a warhammer...)
- Banner with Dwarven head (clasped in his tail.)

I'll post a step-by-step painting guide in the next couple of days, but in the meantime, here are a couple more shots of Squeek Vermintide. 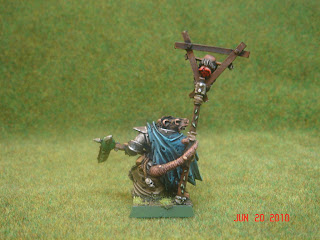 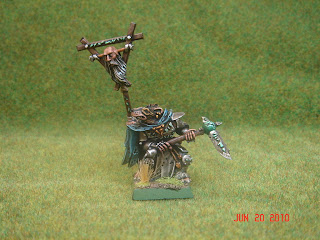 Now that my Skaven army has a leader, we're one (small) step closer to world domination!
*Neek!*
Posted by Oddjob at 11:13 PM