After finishing my first Plague Priest unit, I definitely needed a break from the monotony of painting rows of troops one after the other (even ones as amusing and interesting as Plague Monks), so I decided to focus on a character model...a Plague Priest!

These putrescent priests are "the most degenerate ratmen of the Disciples of Decay..." and that makes them perfect to lead a Clan Pestilens themed army or a contingent of Clan Pestilens troops. I haven't used any of these guys on the battlefield yet as I haven't painted up my army, and opinions of them on the net are pretty mixed, but the model is pretty cool. I really like the fume-filled censer he is swinging and the style of the robes and staff.

Here are the pics: 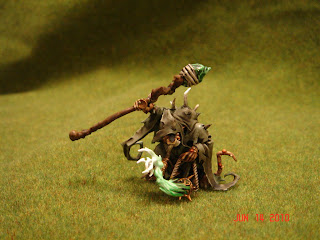 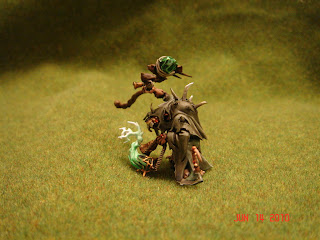 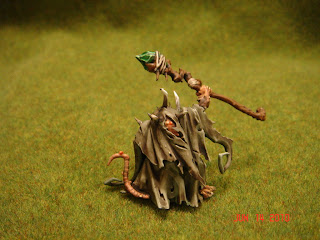 Painting the Plague Priest after gaining some experience with the other Skaven models I have painted so far was helpful (although not by design...) as I got some good experience that really helped with this model:
- My Warplightning Cannon gave me some experience painting Warpstone.
- Plague Monks gave me a good chance to paint buboes and boils etc. as well as the chance to play around with making robes and cloth look suitably dirty.

Although I think that I could do a bit more to make the boils etc really stand out on the Plague Priest I think they are starting to look suitably unpleasant! (Thanks to a very watered-down Blood Red and some Elf Flesh highlights...)

This is the model from the Screaming Bell/ Plague Furnace set, so he doesn't come with a base. I'll have to base him up next.
Posted by Oddjob at 7:44 PM