I haven't done any painting for a long time, so it was with horror that I opened my "Clan cupboard" and realized I must still have a good 70 to 100 figures left to paint (and a couple of warmachines too) before my clan is truly finished.

Having purchased some Night Runners I got good advice that I should paint them up quick because they are so useful (as Gutter Runners). However, after assembling them and taking a look at my horde I realized that my slaves are still far too few in number to be really useful...and as everyone seems to think that it is slaves that are actually our most important unit I thought I should buff up my unit size a bit first.

If you take a look over at my clan you can see that I use previous edition Clanrat models as slaves. I really much prefer the Island of Blood clannies, so use them as my core troops. (I think the older generation look really weak and slave-like compared to them.)
So here they are! 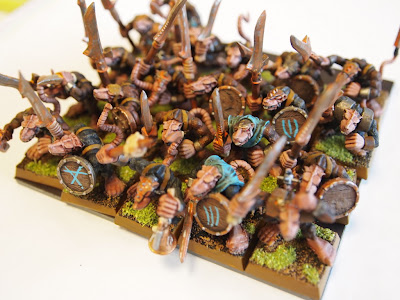 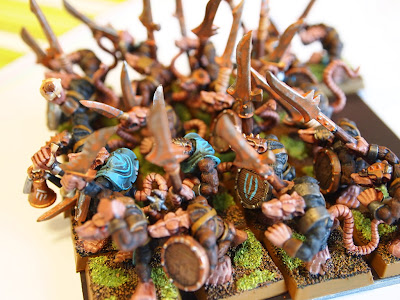 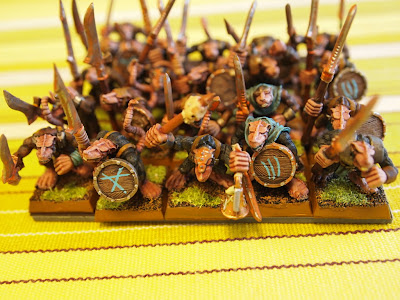 I think they have come out OK, considering that painting these models is actually a bit of a chore and I didn't lavish too much attention on them.

Some errors I made, mainly through laziness, that could/ should be avoided in future:

1. As I have had these undercoated and lying on the shelf for ages I didn't check that they had been carefully sanded to remove mould-lines/ flash. If you look closely it really shows. These older models in particular suffer from this is on the:

2. When buying these older models secondhand (especially from eBay) always check with the seller that you are going to get the tails. Many of my lot are missing tails and it annoys me now. (I tell myself that in my clan, slaves are punished by having their tails clipped off. Or they lose them in fighting? Or perhaps sell them in exchange for food?)

3. Overexuberant rust washes! This is a Solar Macharius Orange that has been heavily watered down, but it looks way to "orangey"...

4. At the time I added sand to the bases before undercoating the model, I wasn't careful enough about the application of glue. Most of these models have sand on their feet. It doesn't sound like a big problem but actually it makes painting the feet a lot harder - and it looks bad.

I used the save overall techniques as used before in my Clanrats/ Slaves 4th Generation Guide but with the addition of a Solar Macharius Wash to get the rust effect.

So...now that I have done another 21, that brings my number of slaves to 51. I can increase that number another 40 by taking out one of my 3 units of 40 clanrats, but I really should consider painting up another 50 actual slaves.

Gutter Runners next I reckon, as they should add a whole level of new tactical options to my horde.