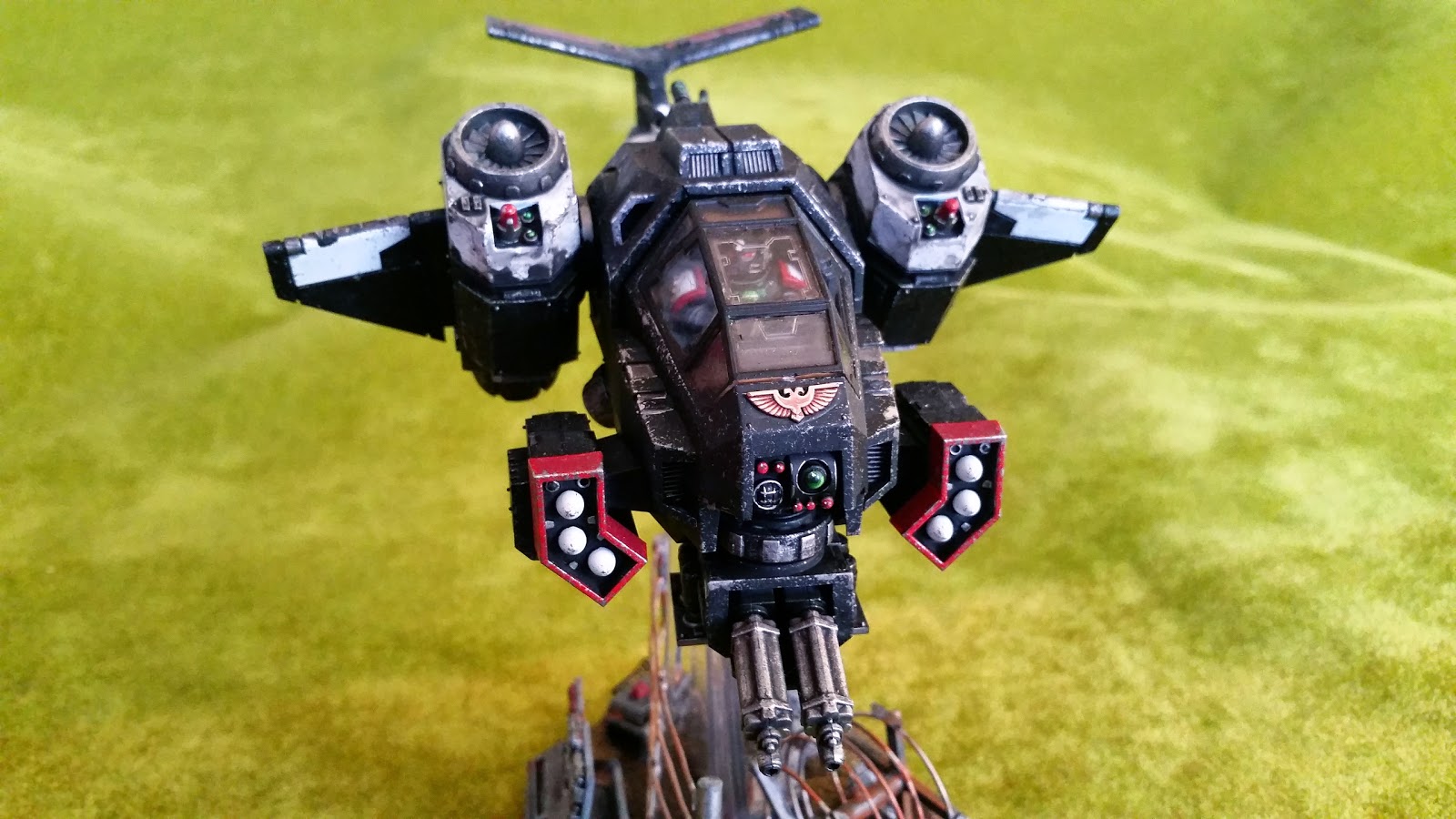 Even with his senses elevated to almost painfully sensitive levels by his armor, Battle Brother Vale struggled to see through his damaged canopy. Worse yet, despite his umbilical connection to the sensors of the Stormtalon in which he sat, he struggled to pierce the black inky pall of swirling rain and pollution that was the planet's atmosphere.
"Wild Wunz..." he thought.
"...how could those greenskins still be on this forsaken planet?"

After all, hadn't the combined might of the Emperor's finest and their Imperial navy allies decimated their enemies in orbit months ago, stranding them on the surface and dooming them to a slow death in the poisoned atmosphere? He and his brothers felt sure that would have meant that none of the hated enemy would be alive by now...

His terrain-following radar suddenly sent a subtle warning into his mind through his suit, snapping him out of his thoughts and pulling his eyes to the green instrument panel in front of him.

A structure, several clicks ahead - just large enough to necessitate a pass to scan for signs of the enemy.

Under normal circumstances, the networked senses of his Stormtalon, combined with those of the elements of the fleet in low orbit, would have clearly picked up any signs of life for hundreds of kilometers around. Instead, the pollution in the atmosphere and the unusual weather meant that he was operating on visuals and the Stormtalon's limited sensor suite alone.

Through the darkness the structure appeared. He could vaguely make out a rockrete bunker, towers and defensive walls.

Pulling back on the control column, Vale brought the 'Talon to a halt in the air, thrusters automatically adjusting to point down and enabling him to enter into a hover. As he had been taught so many centuries ago by Flight-Lector Malory, he went into Search/ Sweep protocol - ++Searchlight - ON++
++Firing mode:SLAVE++
++Local signal search: ON++
++Cannon - ARMED++

For a moment, he felt the slight pressure in his skull confirm the autocannon as being aligned to his vision. With the 'Talon stable, he now began to rotate in place through 360 degrees, the twin-barreled weapon following his gaze. He peered into the pool of light cast by the searchlight as it illuminated the darkness, his helmet lenses automatically switching to protect his vision.

The detritus of an abandoned position. Piles of filthy rags. Empty ammo boxes strewn about.
More ammo boxes...and lots of graffiti. He peered at the ugly script. Judging from the rudimentary marks and crude language, Clan Wild Wunz of Waaagh Gutrip had been here.

Vale had no time to think further. All surprise was smashed from his mind by the force of the impact and explosion on his port upper-hull. The talon flipped up and over on it's side before crashing into the mud and turning over at least twice. As the craft came to rest, the sound of rending metal and smaller explosions receded. Helmet systems suppressed everything other than the blaring sensor alarms and the oddly calm voice of the auto-pilot cataloging damaged systems and advising him to abandon his craft.

Tensing the fibre muscles in his armour to their maximum levels, he punched the broken canopy with all his strength. It shattered into thousands of pieces, falling all around him and his ejector seat. Grabbing the edge of the canopy with his left hand, Vale reached down with his right and retrieved his short sword, deftly attaching its scabbard to the magnetic lock points on his thigh. He pulled himself up and out with both hands, only to slide uncontrolled down the side of the cockpit, sliding headfirst into the thick mud.

Driven by years of training, Vale pulled himself up into a defensive position. A slight crouch, left shoulder down toward any enemy, back to the hull. His right hand came to rest lightly on the pommel of his short sword on his right thigh (from where it could be drawn up and thrust directly quickly forward without reaching across his body and exposing his right side). His left hand reached down to his holster, only to find it empty. Realizing his bolt pistol must have been thrown out of the holster from the force of the crash, he reached up and removed his helmet. Lenses smeared with mud and dirt would only impede his vision for whatever was to come.

The rain felt...warm? ran down his face. Into his eyes. Stung!
He blinked. Tried to see.

Through the rain, he sensed movement, then the slow emergence of a shape (shapes?) through the gloom.

His fingers slowly closed around the grip of his sword. Silently repeating a prayer of battle inviting the Emperor to guide his blade, he slid the short sword from it's place, raising and extending it to a horizontal position, point towards the shape in front of him.

He gently touched the control stud. The power unit crackled into life, projecting a blue corona of impenetrable energy that illuminated the blade - and the crowd gathering in front of him.

The figures moved closer. There was no urgency in their movement. It was almost...casual.
The stride, the very bulk was familiar, but he knew well that there should be no others in this zone with marine armour. He knew in that instant what and who he faced.

The deep, metallic voice through the rain only confirmed his suspicions.

"Greetings brother, from the Crimson Slaughter"


Looking back through my posts for the last year or so, I realized that I hadn't posted any final pictures of my completed Space Marine Stormtalon here on the blog. I've been pretty good about posting stuff on Google+ and that has sometimes meant not taking time to write here.

To rectify this, here are some photos of the Stormtalon. As I looked through the photos, I remembered that this was the first time I first tried Object Source Lighting (OSL) on a model - the glow on the pilot's chest from the instrument panel. It worked out ok (but not great). 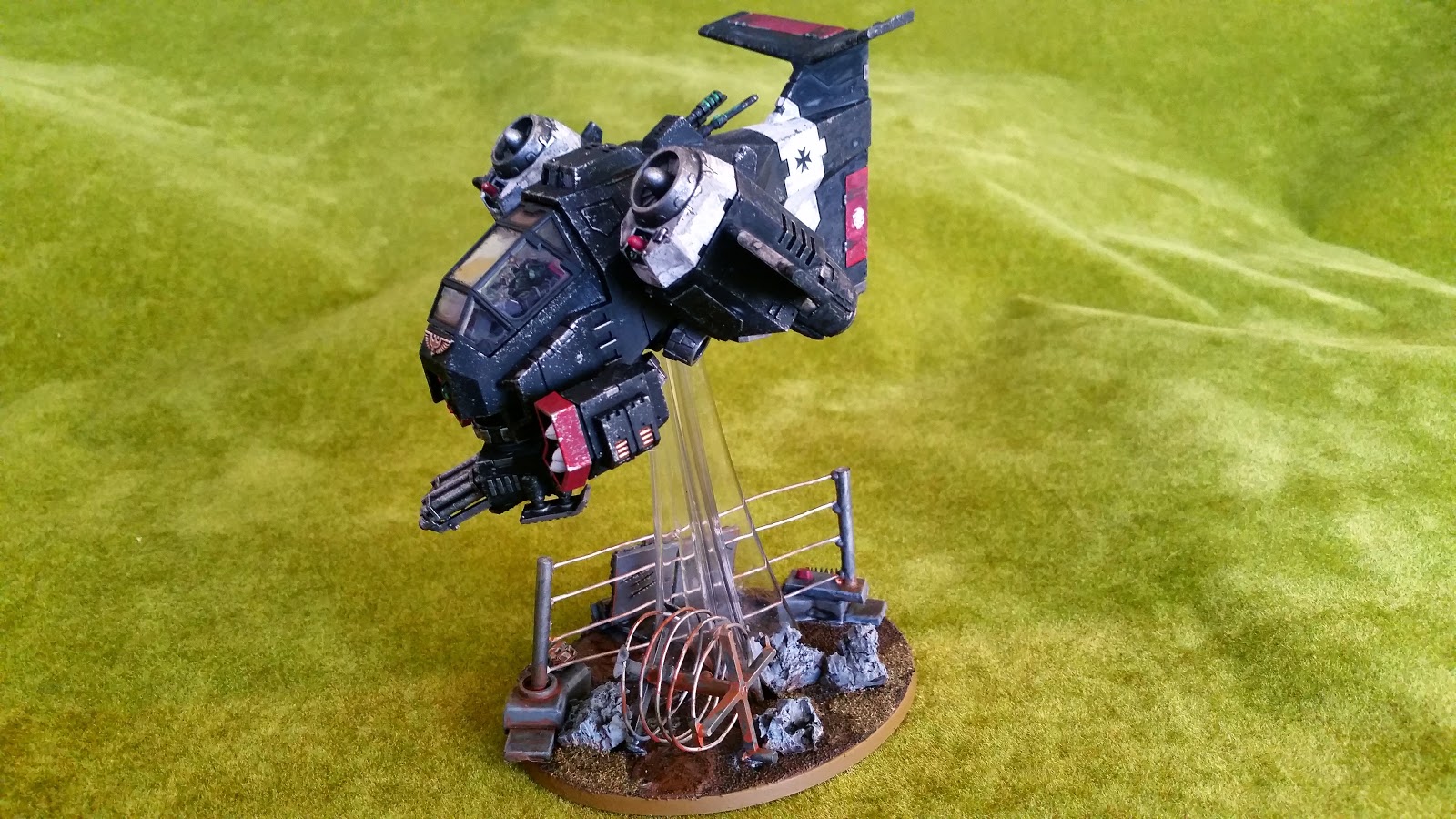 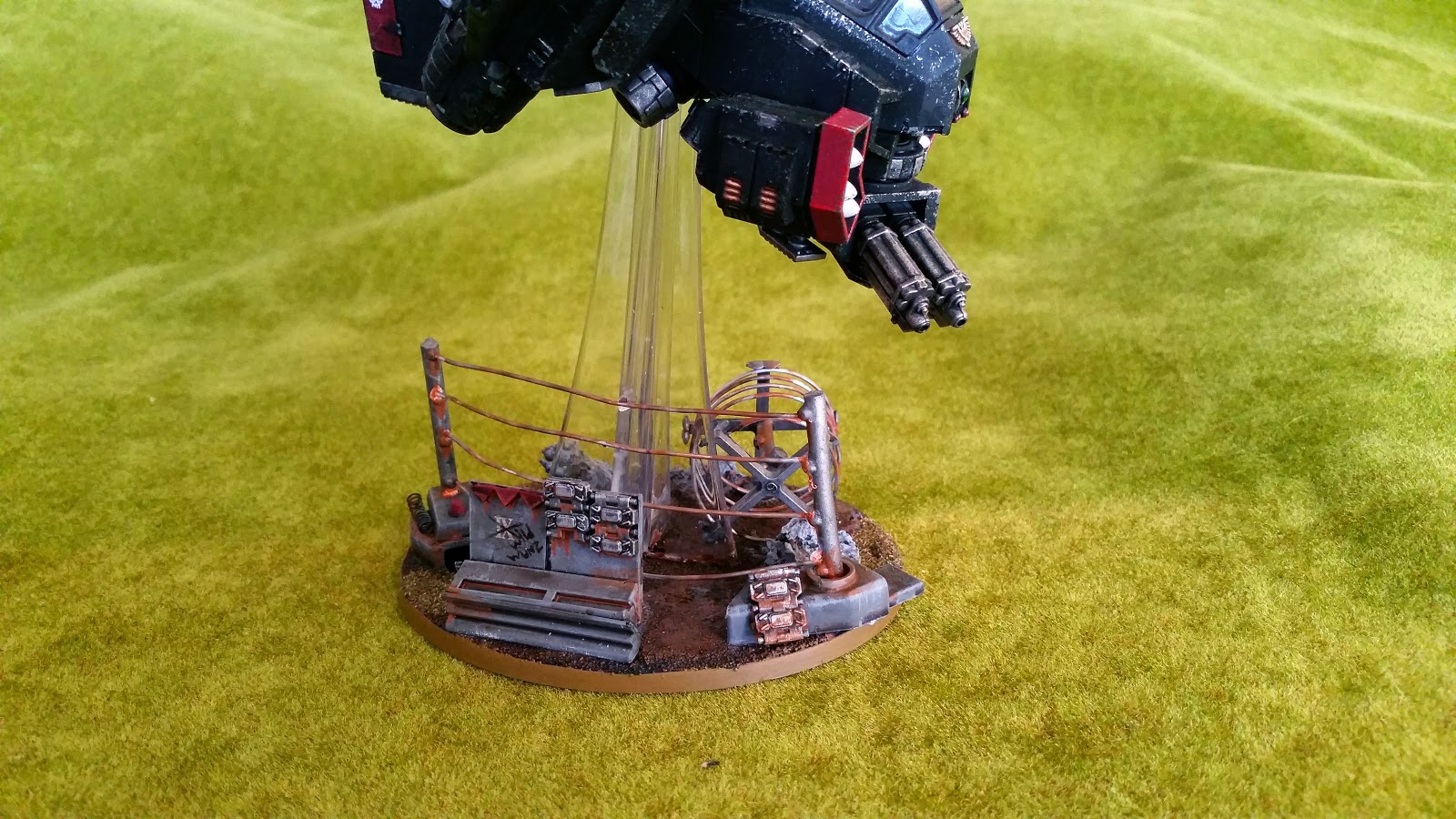 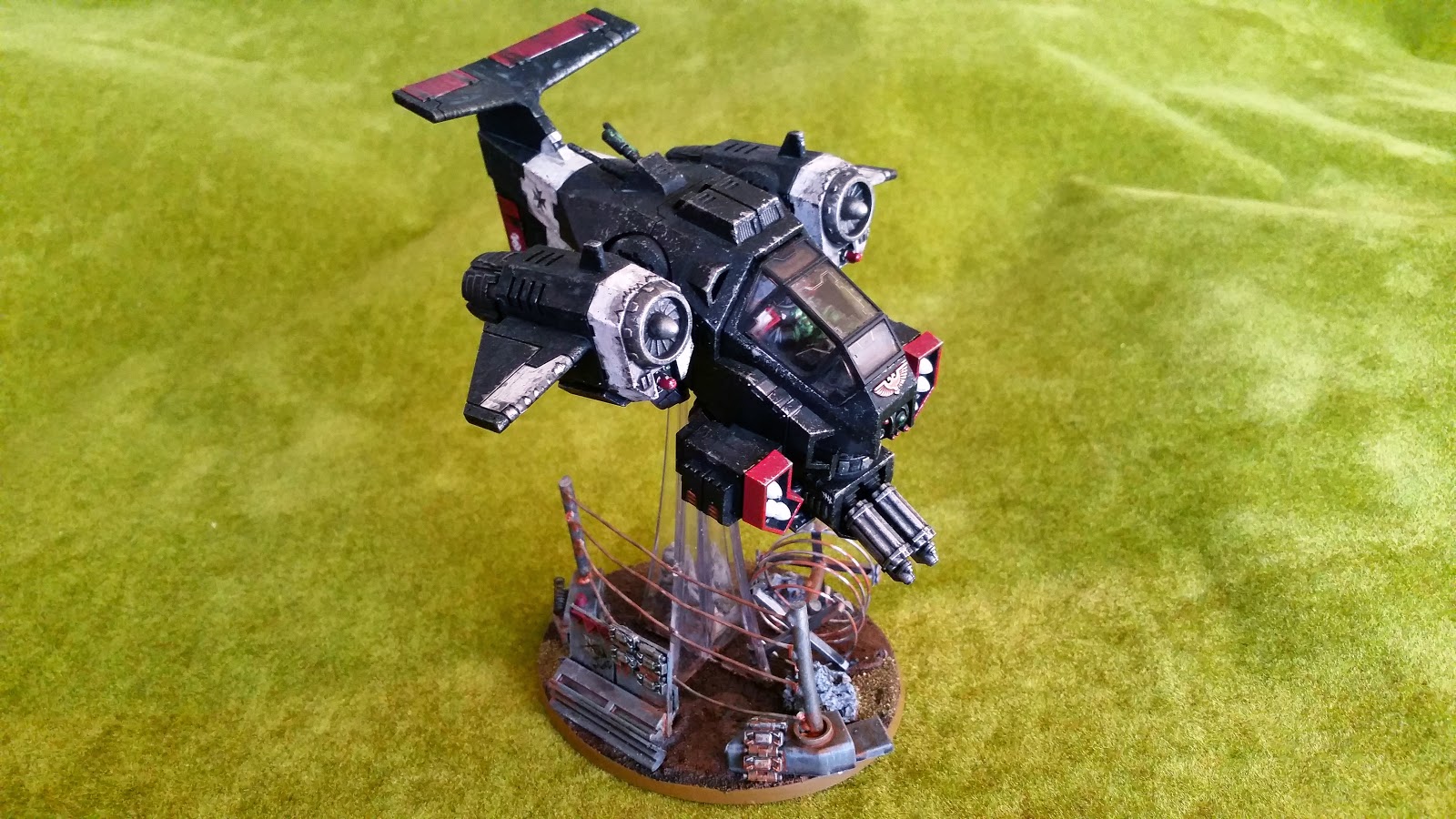 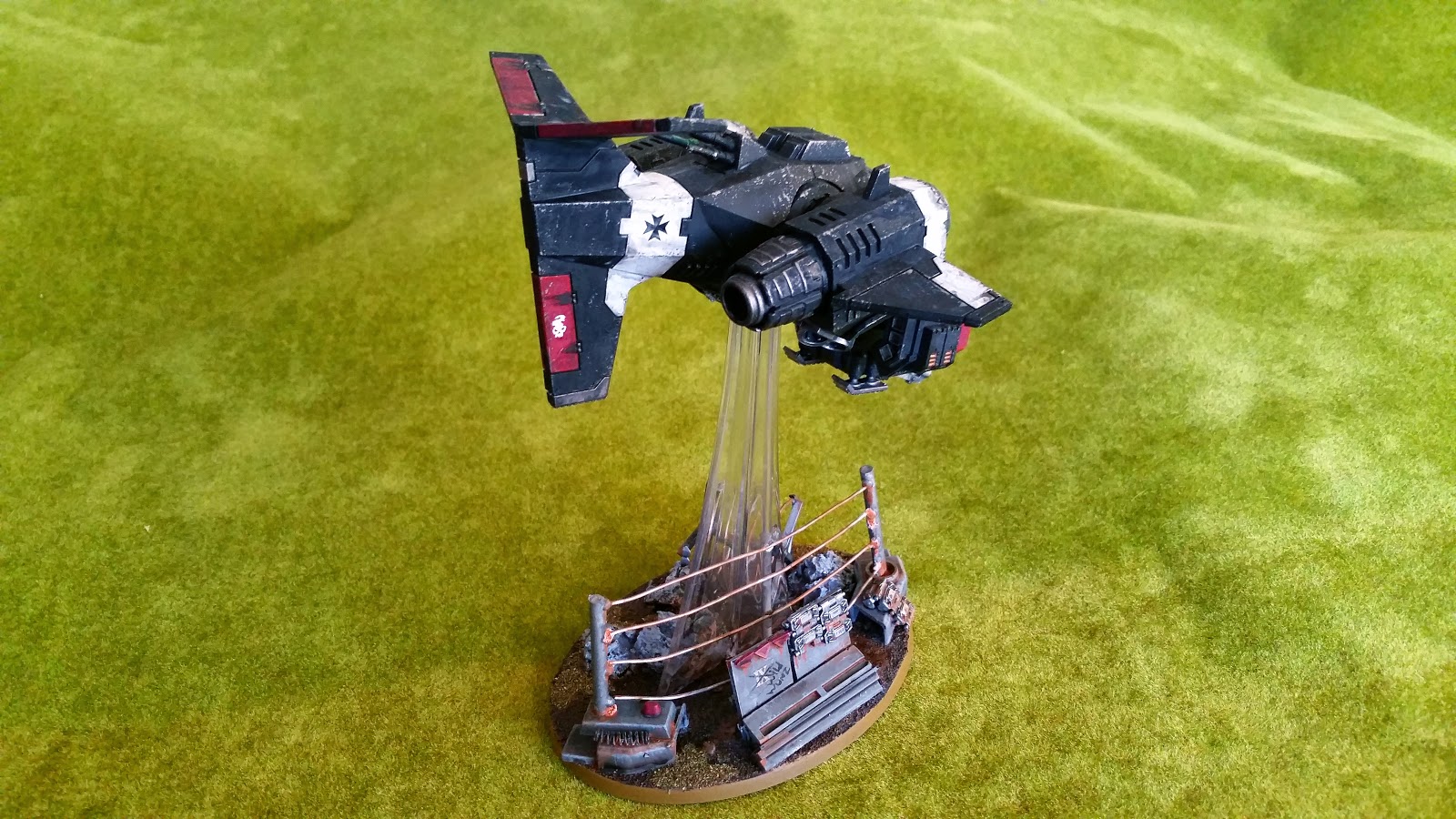 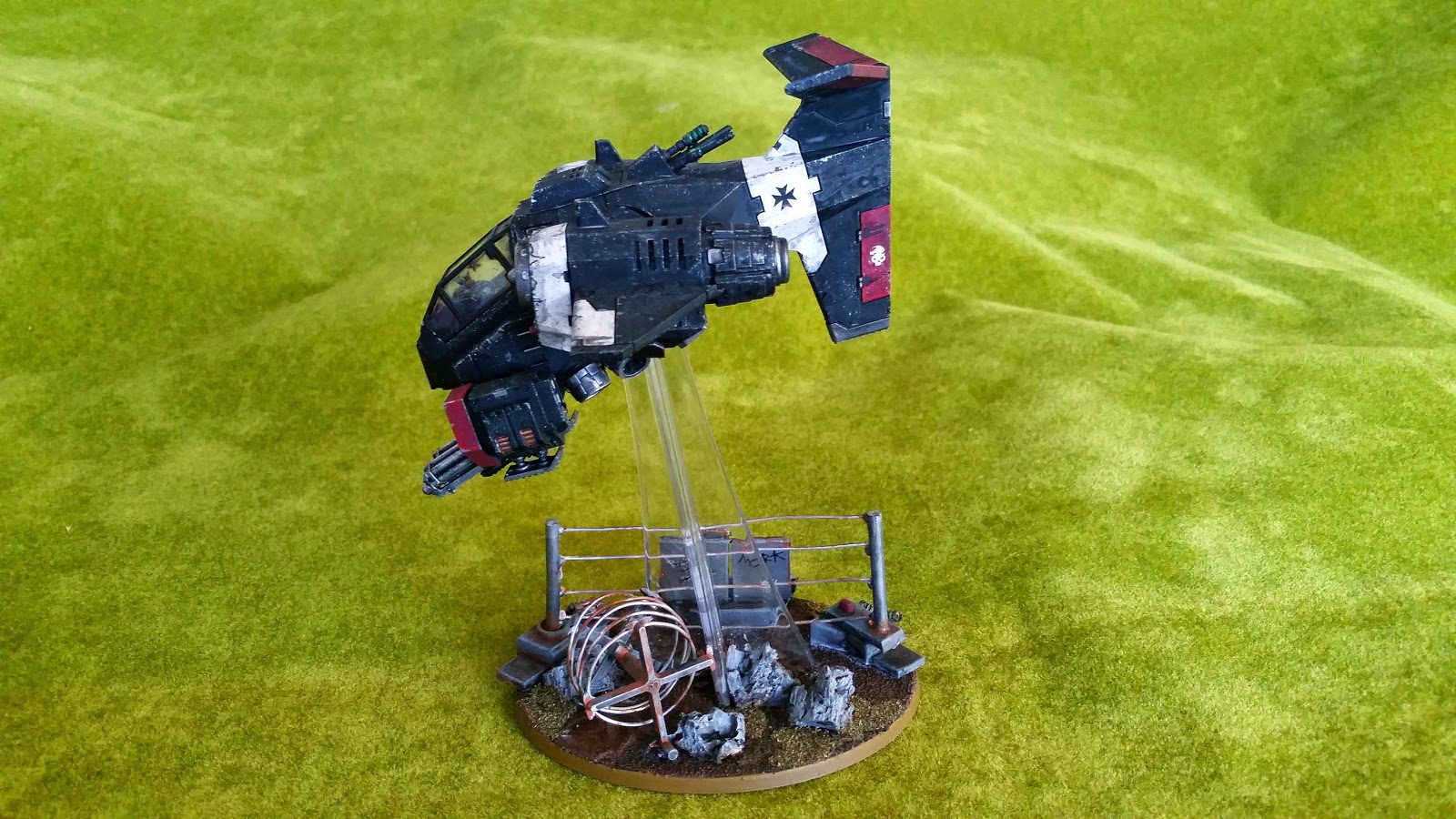 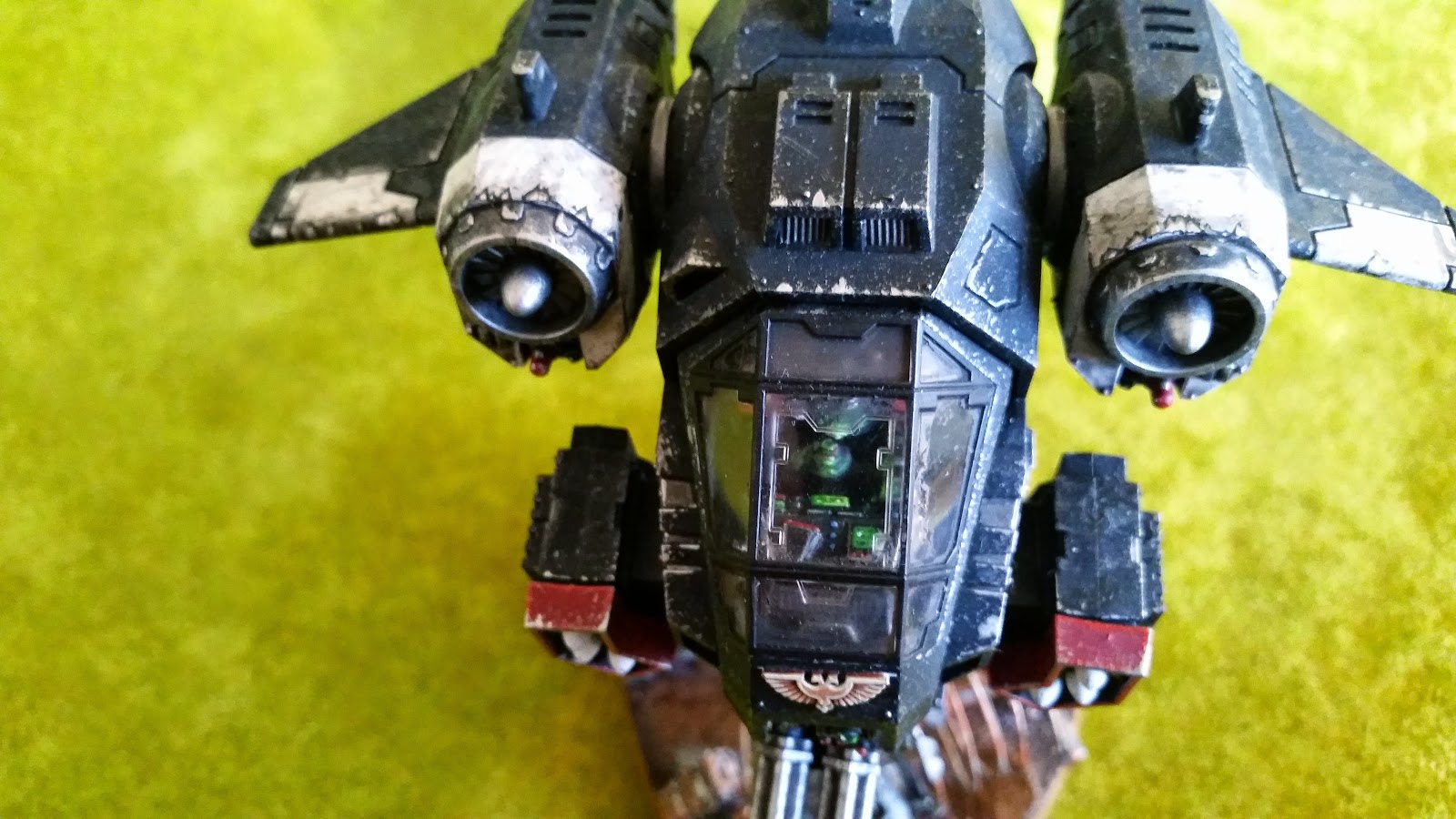 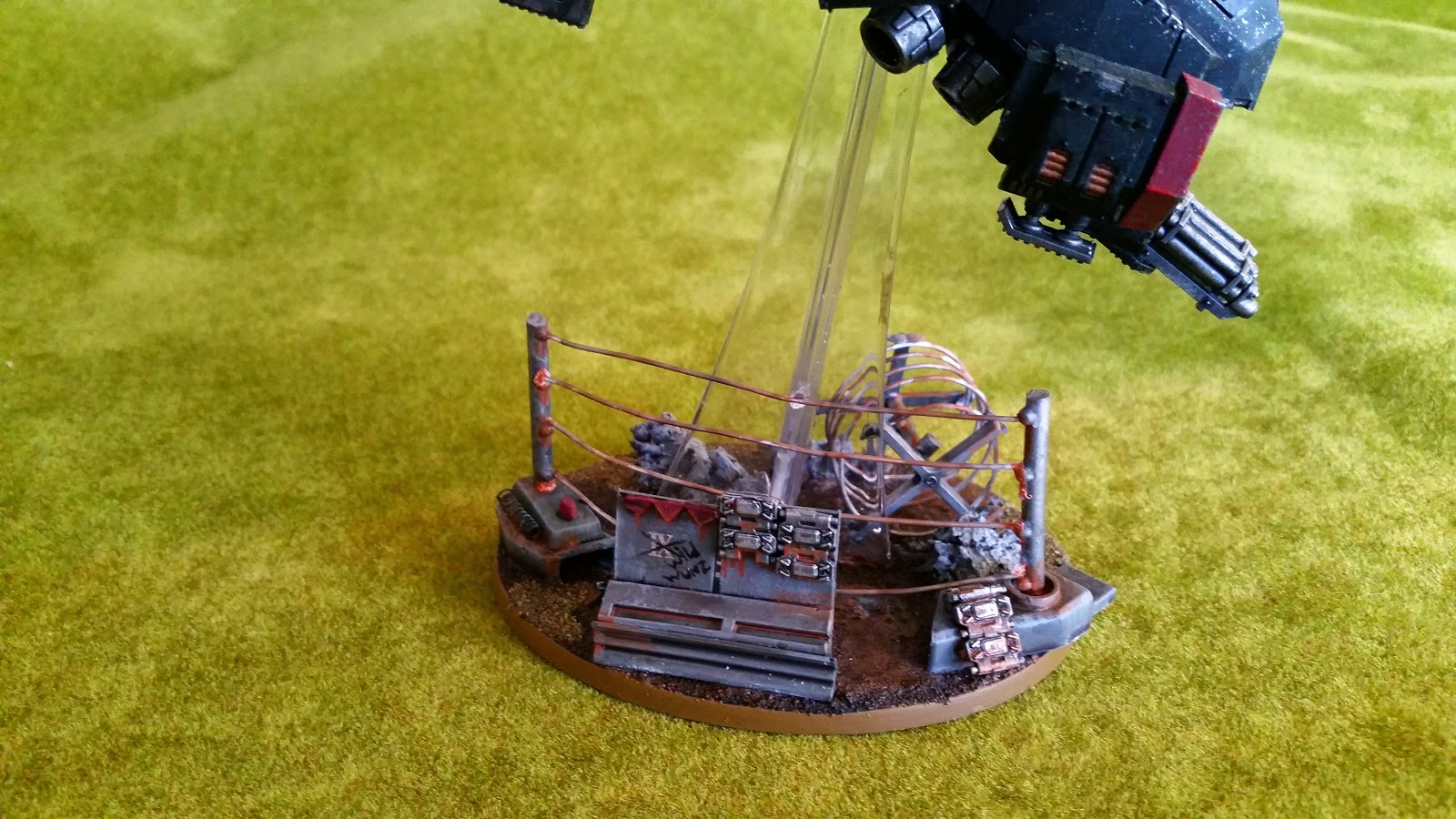 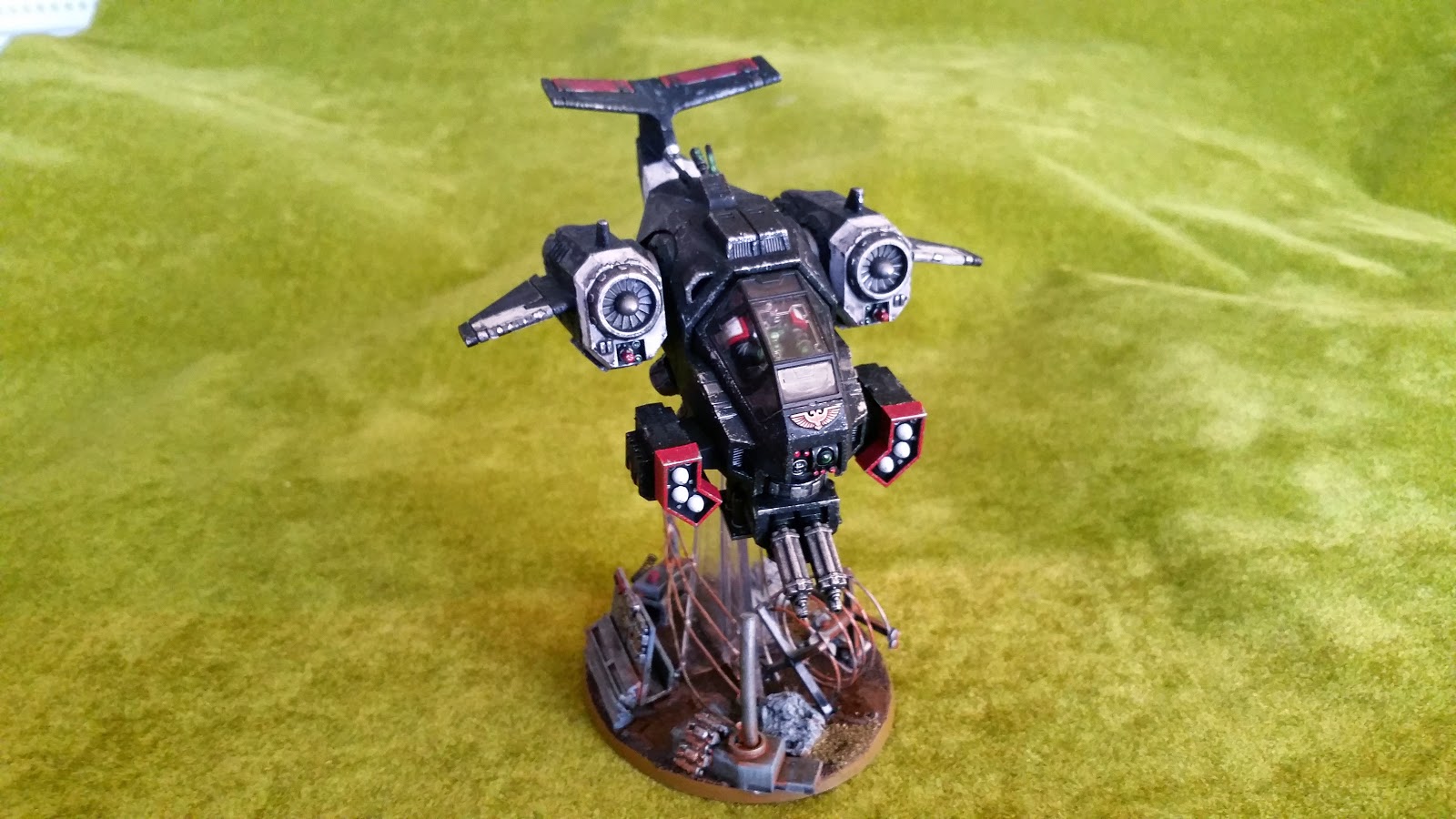 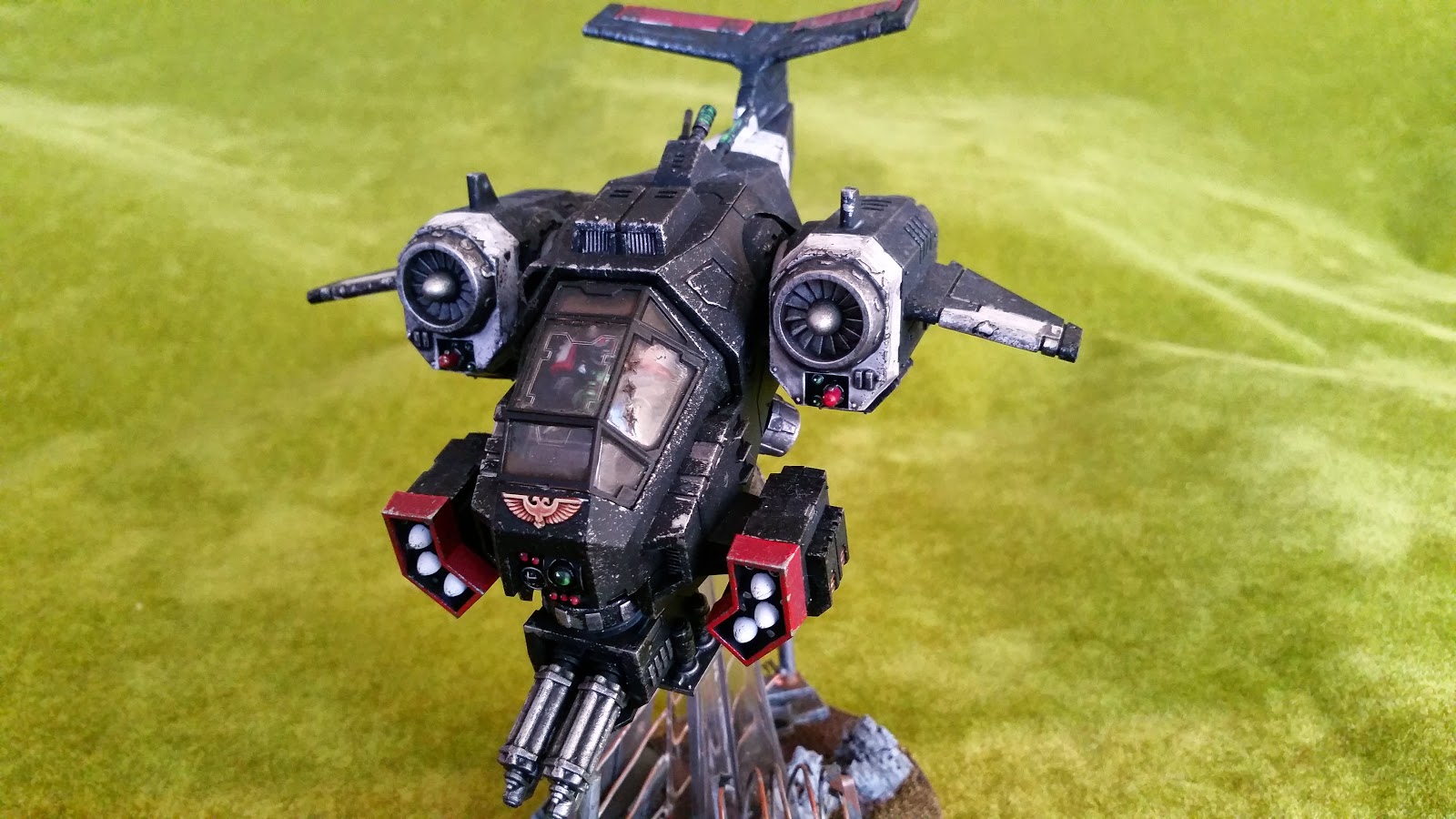 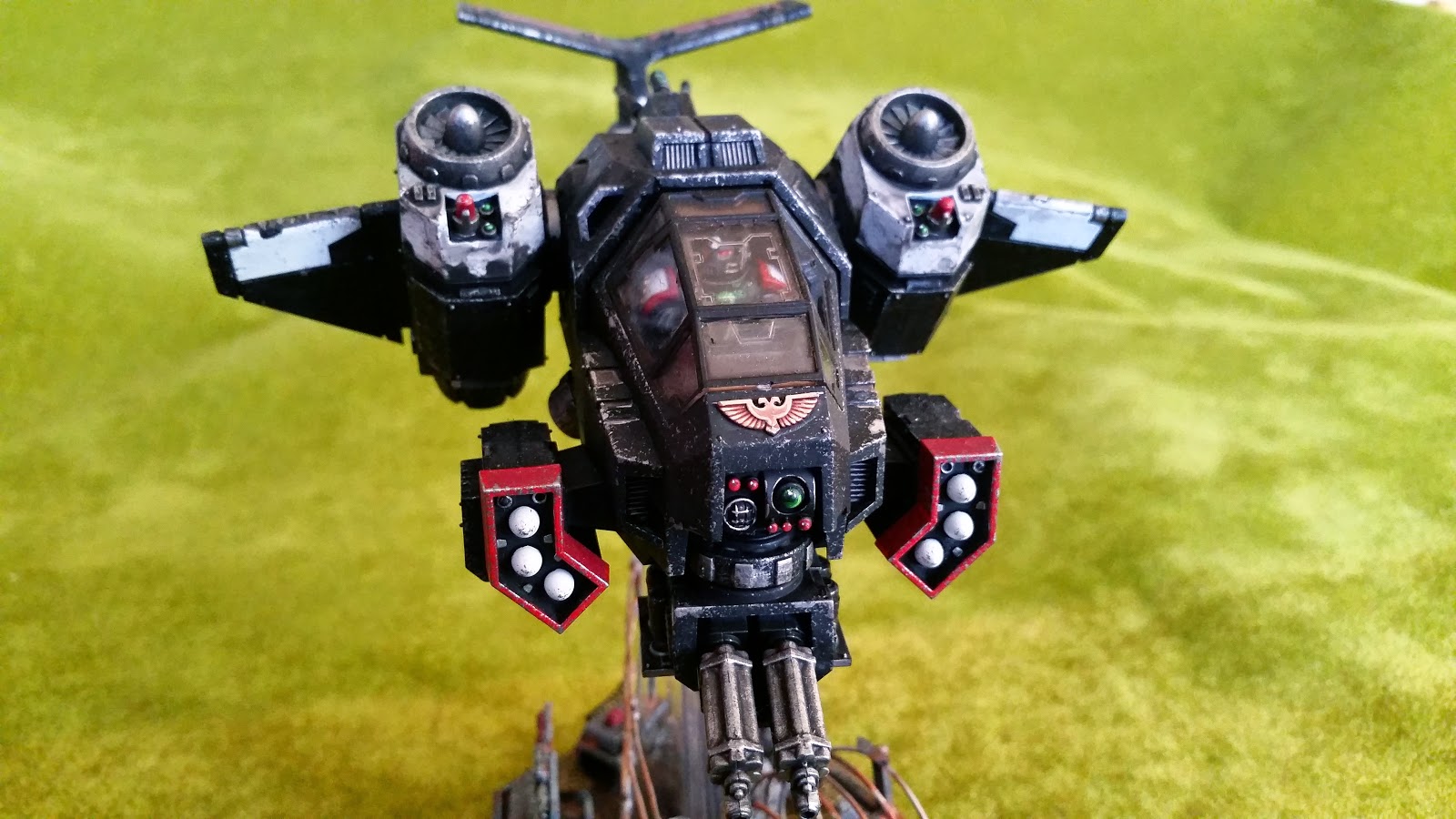 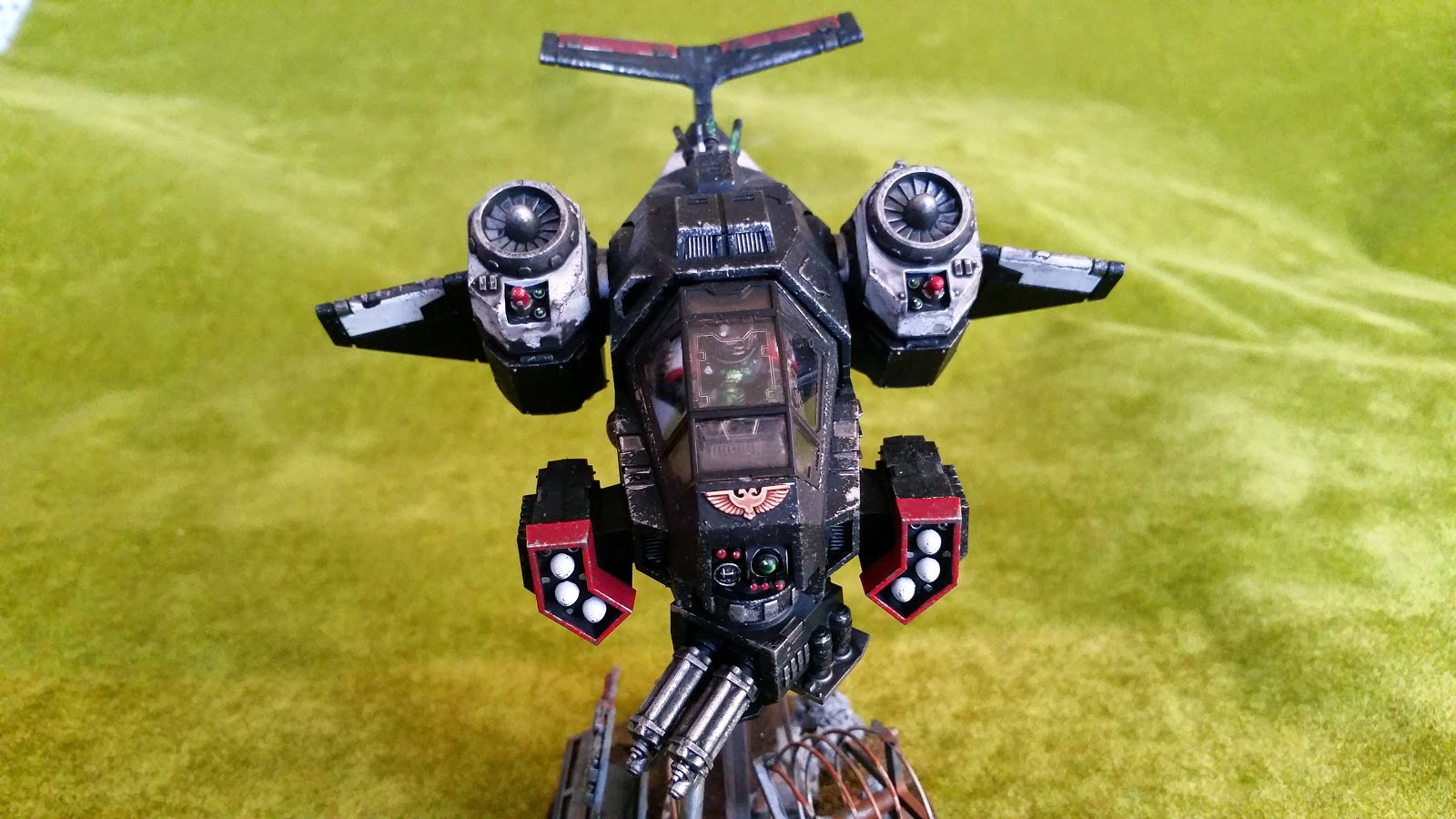 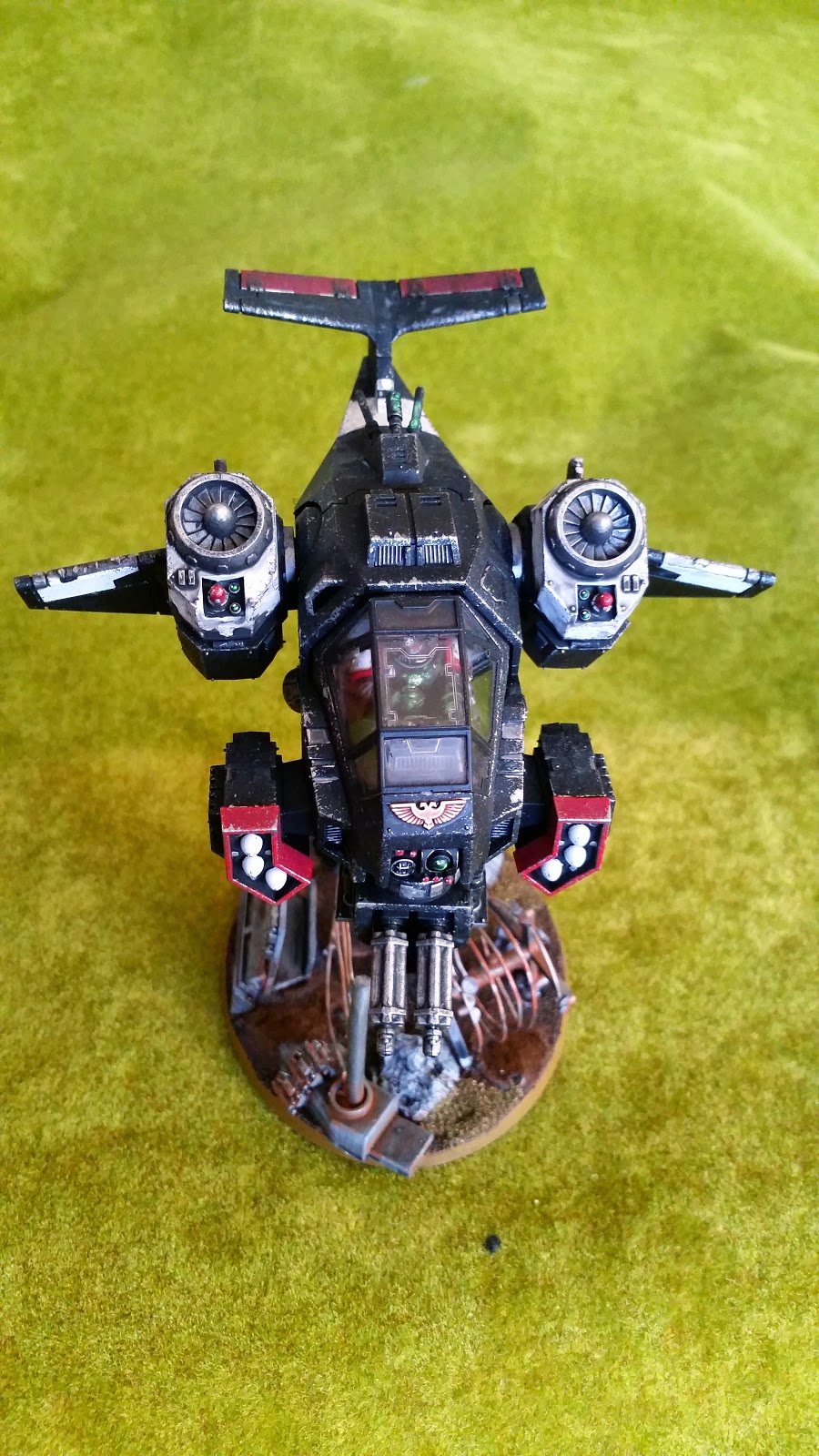