Just time for a quick update and some pics today...

After finishing my Gutter Runners/ Night Runners, I was torn between starting to paint up x20 Stormvermin and doing another warmachine. In the end I decided to do a warmachine. Although I like the SV models, I don't have enough of them to be really effective at the moment and I wanted a break from doing units of rats and do something that might be (relatively) quick.

So, the other day I started out with the new Warplightning Cannon/ Plague Claw Catapult box. Inside are the parts to make one or the other, but it occurred to me that it must be pretty easy to make it "dual use", as I had done with my Screaming Bell/ Plague Furnace conversion.I got some comments that I could have used a much simpler approach for that conversion, so this time I tried to make things simpler, and I think I have found a way to do it.

I'll post a full entry once everything is painted-up, but I can give you the idea here.

Firstly, you'll need to clip away the wires on the front of the Warplightning cannon. Then, attach the Plague Claw Catapult basket to the back of the WLC arm. 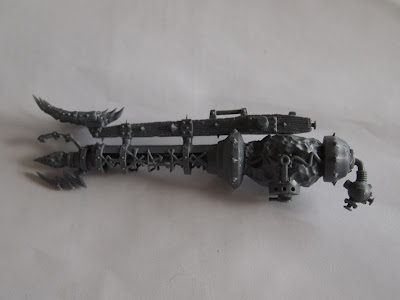 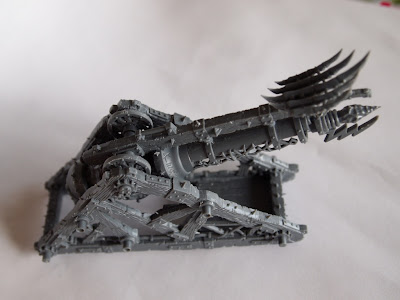 File away a small curve in the floorboards of the frame, so that the whole unit can rotate freely. 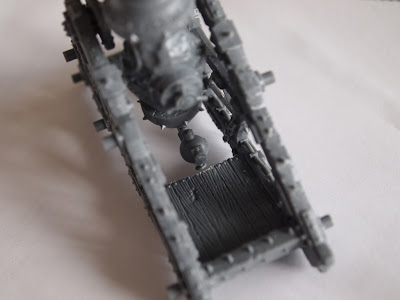 Finally, attach the floorboards at the "front" of the model. If you do this and you DON'T GLUE THE CREW IN PLACE (I put them separately on bases) you should be able to rotate the whole arm so it is either pointing "Forward" (towards the spikey front of the unit) as a Warplightning cannon (with the PGC basket facing downwards) OR "Backwards", (with the PGC basket facing upwards.) as in the photos below.
Although at first I didn't think it looked right, I have actually come to like it more and more. After all, I'm sure that our Warlock Engineers could find a way to strengthen the WLC so it wouldn't shake itself to bits every time the PGC fired right?!