What's the connection you may ask...

...why, of course it is the latest release from Games Workshop - Dreadfleet.

GW Describes Dreadfleet as:
"...a boxed game for two (or more) players that includes everything you need to make war on the turbulent seas of the Warhammer world. At your command are two fleets of ships - the Dreadfleet led by the Vampire Count Noctilus, aboard his gargantuan sea-hulk the Bloody Reaver, and the Grand Alliance commanded, by the Pirate Captain Jaego Roth who recently stole the Heldenhammer - the pride of the Imperial Fleet, and one of the largest galleons to ever sail the seas.

As your ships engage in furious battle, it's down to you, the fleet captain, to make important split-second decisions. Do you bring all guns to bear on the closest enemy warship, or do you sail into position for a furious broadside? What happens when the warship catches fire, or worse, the powder kegs ignite? Exactly how much punishment can your warship take before it sinks without a trace? Are those Undead seagulls or flying piranha fish? And, when all else fails, do you have the courage to ram your foe, board their ship, and engage them in a duel to the death?"

The box seems to include a fair amount of bits 'n pieces, including a gaming mat, which looks pretty good.


I note that the game and all the stuff that goes with it are under the "Gaming" section of the GW homepage and not under specialist games. I guess that means you will be able to play it in a GW retail store (unlike some games, like Blood Bowl, which some stores *cough* Jinbocho Tokyo *cough*  won't allow you to play on their premises...)


The Dreadfleet page has all the details. If you are interested don't forget that Dreadfleet is only available "While stocks last" (hence the hourglass symbol on the images above.)

It all looks pretty cool, but I have to say that I am probably not the kind of player who would be into this... ...until I noticed one of the ships that seems to come with the set, and which can only belong to the Children of the Horned Rat: 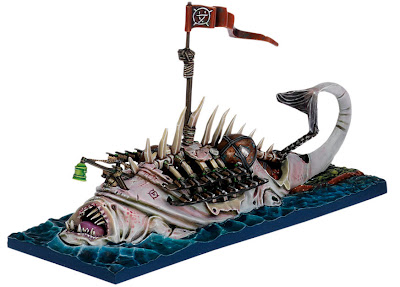 It is some kind of sea-going blindworm? Surely only Clan Moulder would have the ability (and talent pool of the likes of Throt the Unclean or Skweel Gnawtooth) to turn one of these enormous beasts to their foul purpose. (I love the way the beast appears to be led on by the glowing Warpstone brazier attached to its forehead!)

Which brings me finally to Clan Skurvy, the pirate ratmen!
I have heard that more detail for these terrors of the high seas can be found in the book, "Uniforms and Heraldry of the Skaven". I don't have it, but I hope to lay my hands on it soon. Even without the book though, interested Warlords, (or should that be Admirals?) can find more info around the net. GW in fact has an article on one pirate clan, Clan Skurvy. Click below to find out more:
Chris Peach's Clan Skurvy.

I really like the colour-scheme and it would be pretty cool to add a unit of these nasty-looking lads to my own Warlord Clan. Not only would they liven up my army with a different colour, but also for the fun fluff: cutlasses, eye patches and braces of pistols would be great! (No doubt there wouldn't be any parrots - far to tasty a snack to last long, and repeating "Pieces of Warpstone, Pieces of Warpstone!" would surely mark anything down for a messy death.)

Has anyone got any plans to buy Dreadfleet? Or has anyone played it? Let me know.