A Return to Tau?

No painting or Skaven today, but just wanted to reflect on a great weekend of gaming...
...with Warhammer 40K!  (Yes, I know this is a Skaven blog, but at the bottom of this entry I'll get to the point by asking for your opinion on something...)

As you may or may not know, I got back into Warhammer via a rediscovery of Warhammer 40K. The 40K universe was a passion of mine that first took hold when I was a teenager and then briefly lapsed  (for around 20 years or so?) before being resurrected by a friend who casually asked me if I had ever heard of Warhammer and would I be interested in fighting some battles?

Anyway, I haven't played 40K for what seemed like months (work, travel etc.) when finally some friends and I were able to get together for a 3000 points per-side 4-way battle.
Space Marines (1,000 Points) and Tau (2,000 Points)
v.
Tyranids (2,000 Points) and Orks (1,000 Points)
So, two horde armies against one extremely "Shooty" army (Tau) and a "sort of shooty" army (vanilla space marines) locked in battle in the "Dawn of War" scenario and annihilation - excellent match up and massive fun! (If a bit slow. I AM the slowest 40K player in the world.)

The purpose of this post isn't to do a battle-report (as it would take hours to write) but more to share the experience. So what did I enjoy?

1.) Using models that hadn't been used for a while was great. It really re-motivated me to keep working on the Skaven. The fact that I had spent so much time painting a large army previously now means that I know I can do it again! (I'm looking at you unpainted Skaven slaves...)

2.) Re-visiting a Codex and rules that I hadn't thought about for months was a challenge, but a good one! I remembered the tips and lessons that I had learned the hard way over the last year. (Not forgetting lessons learned from the community over at Advanced Tau Tactica - surely one of the best resources anywhere for Tau players.

3.) Opening my army case for the first time in months and lining the models up in a row. HA! That sounds really childish but I suspect I am not the only wargamer who enjoys that. What a return to childhood and simpler times! (playing on the floor with green plastic Army Men?!)

4.) The tactical challenge and fun of working with an army I don't know very well. Unlike many 40K players, I didn't start with an Assault on Black Reach set. Although I am familiar with the Space Marines backstory, unit types and Codex (it's a fun read) I have never collaborated with a "regular" Space Marines army.

5.) Perhaps best of all, the fun of socializing with a good group of people who have the same hobby, and take the same attitude to it as me. (Fun comes first, sportsmanship and laughs!)

Now of course, there was something that I didn't enjoy at all...
NOTICING ALL THE MISTAKES THAT STILL NEED FIXING DOING ON MY TAU ARMY!

So, having played 40K last weekend, I find myself asking the following question, which is mainly aimed at those who play both 40K and WFB...
"What are the key differences, if any, between the two systems that one has to learn and adapt to when moving from 40K to WFB? (or vice-versa?)

Just for fun, some photos my Tau below... 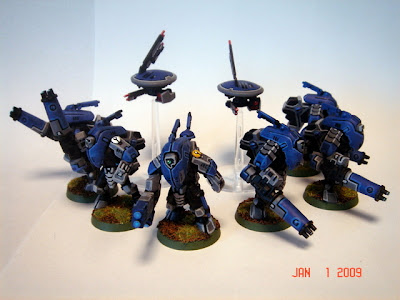 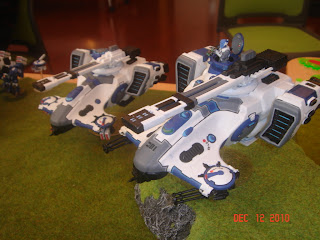 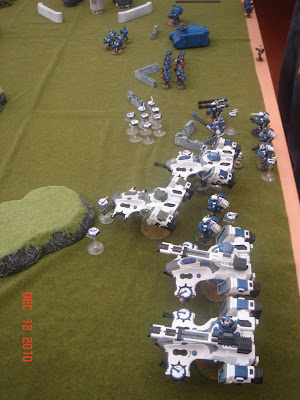 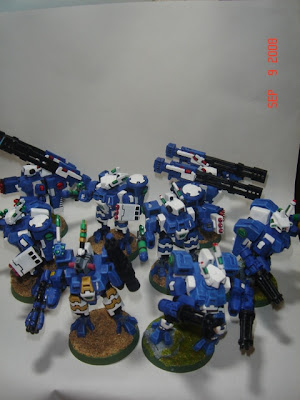 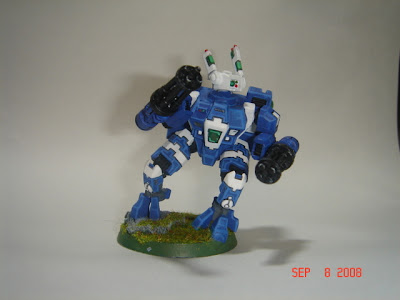 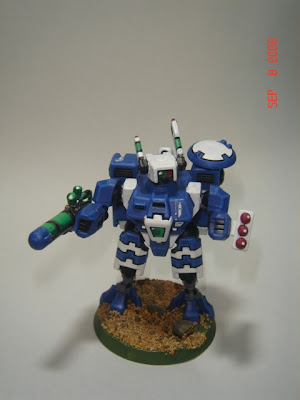 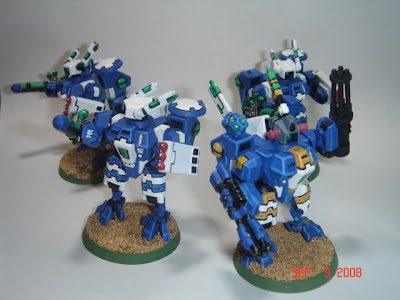 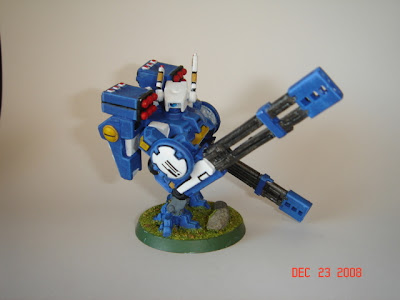