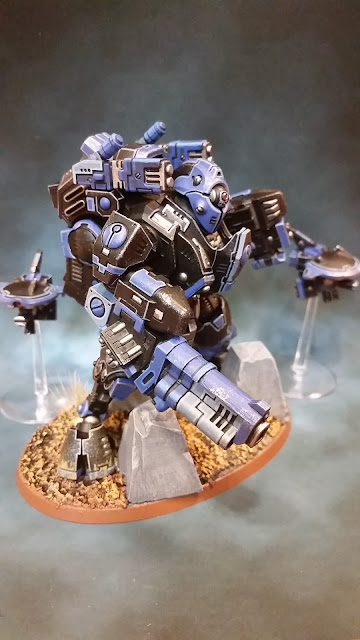 *Warning - Lots of Pictures ahead!*

I finished this model today - at least to tabletop quality! It was a bit of an adventure as I made several bad judgement calls that required going back (more on that later).

Since my previous WIP post for this model I added:
Looking at the pictures, to take this to another level I would do the following: 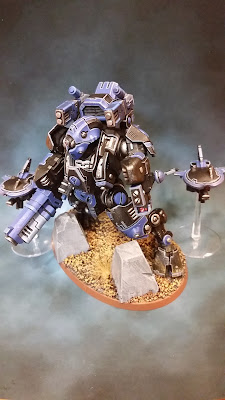 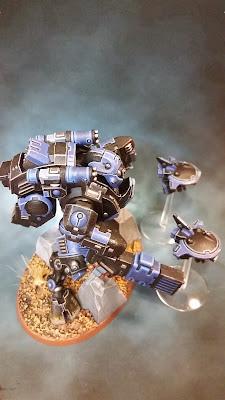 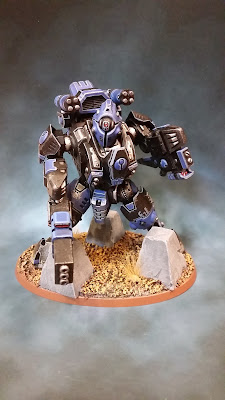 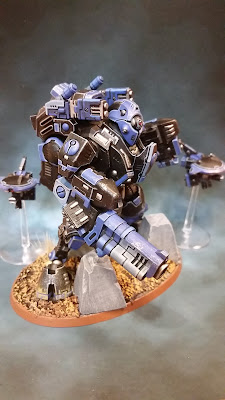 What mistakes did I make?

In my hurry to get on with the model so I could use it last weekend in battle, I didn't think hard enough about the base, so it looked very sparse.

To deal with that today I located x3 pre-painted tank traps from my terrain box. As I couldn't glue them directly onto the current course surface (not enough contact, and they would have looked "floaty") I had to do some surgery! Holding the tank trap onto the base, I used a craft knife to cut around the edges of the tank trap, down to the base of the plastic. After doing this on all 4 sides of the trap, I then used the craft knife to lift off the "Soil" in a square. That gave me the perfect flat surface to superglue the trap down. To make it seamless I then filled the small gap between the trap edges and the cuts with wood glue, poured on my basing material and painted it up. It was unnecessary extra work (I should have thought of this when I did the base the first time), but I think it doesn't look too bad!

My other mistake was working at night under artificial lighting and layering up the barrel of the Cyclic Ion Blaster to a shade or Mordian Blue that was too bright. This meant it was mismatched with the rest of the model, so today I had to go over the barrel again.

I think (you are welcome to disagree) that the overall colour scheme works, and the lenses and freehand insignia came out well (took lots of attempts to get the latter right though!). Also, the lighter weathering applied using a piece of foam was quite easy and I resisted the temptation to overdo it!
With 6 Stealth suits already painted I can field this model as part of an Optimised Stealth Cadre.

There are two options really.
Option 1: Tau XV9 Battlesuits (x2)
Getting back into Tau meant having a good rummage through my model box, where I was delighted to find two of these Forgeworld models. These were pretty much gifted to me by a Tau player getting out of the game some years ago (you know who you are...thank you!) and I never painted them as I moved into painting a Skaven army. 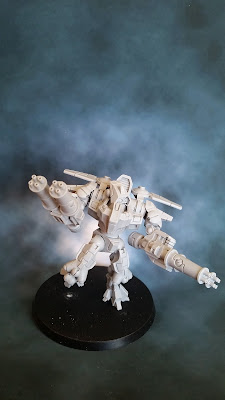 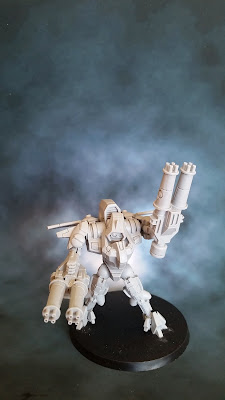 Option 2: A Frostgrave Warband.
Our gaming group discussed trying out this fantasy skirmish game at our last get together, so I downloaded the rules (12 GBP, a reasonable price!). It looks quite good, and with a unit max of 10 models per player (any 28mm models will do) and simple rules it will hopefully be quick to play.

I thought I should be able to put together the requisite Wizard, apprentice and Men-at Arms/ mercenaries by rummaging through my bits box and Warhammer Fantasy models. Sure enough, I could do the following:
Wizard: x1 (High Elf Wizard or Skaven Plague Priest)
Apprentice: x1 (Old Citadel Witch Elf)
Mercenaries: x 8 (3-4 Empire swordsmen, x3-4 Black Orcs with bows/ choppers.)