After being reminded that I had never used my High Elves, I delved into my box of parts a couple of weeks ago to look for some "Quick Wins". These are single or small numbers of models that would add significantly to the small force I already owned and wanted to field last weekend for a game of Triumph and Treachery.

(You might not think that x20 White Lions and x15 Spearmen are a "Quick Win", but 35 models wouldn't even make a decent sized unit of Skaven, and these two units alone form the core AND special sections of the army list!)

In this update, I'll focus a bit on the Mage and the Eagles.


I used my army colours of Warlock Purple. It is difficult to tell from these pictures, but the glass globe and gems have been gloss varnished. 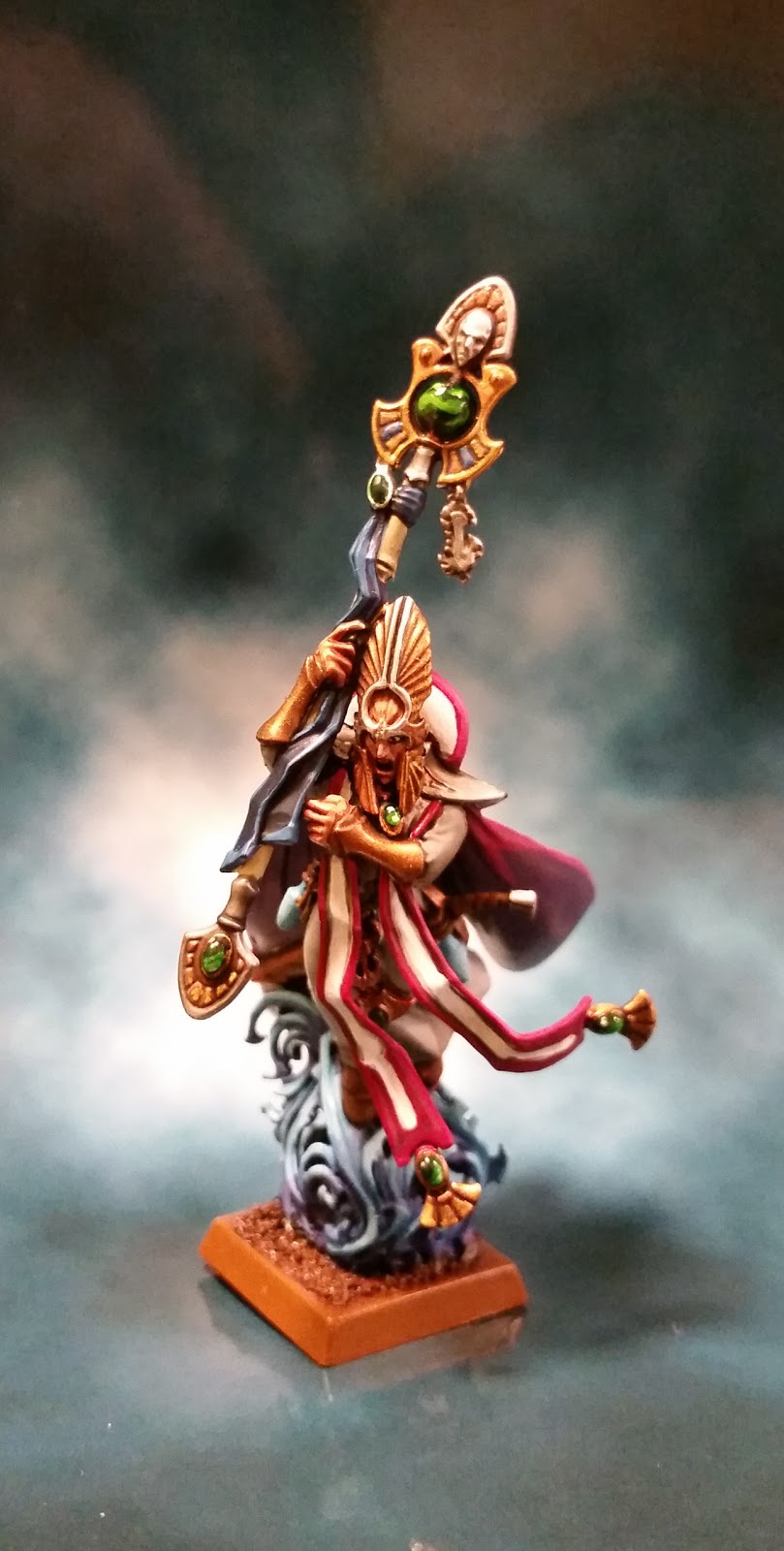 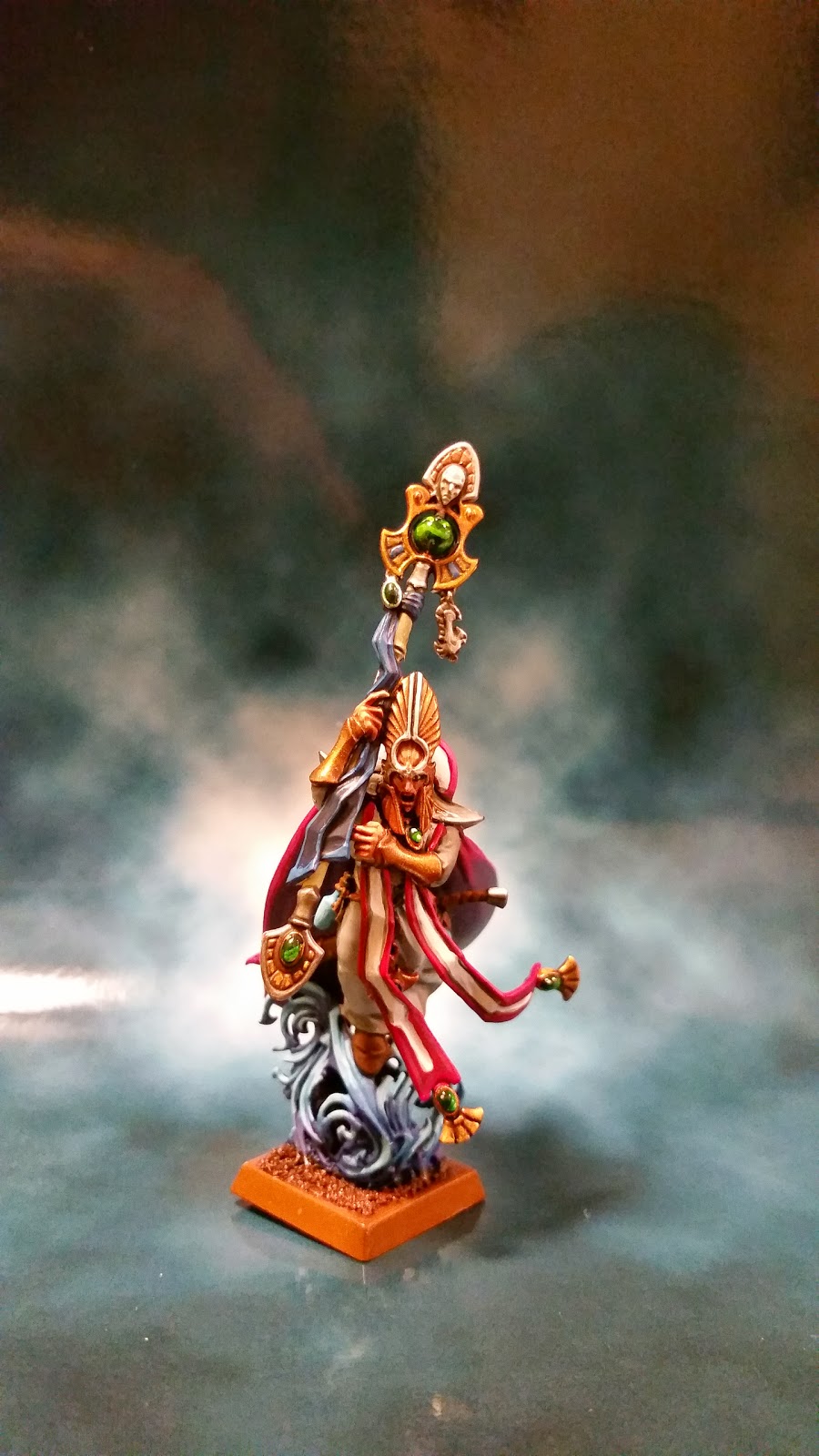 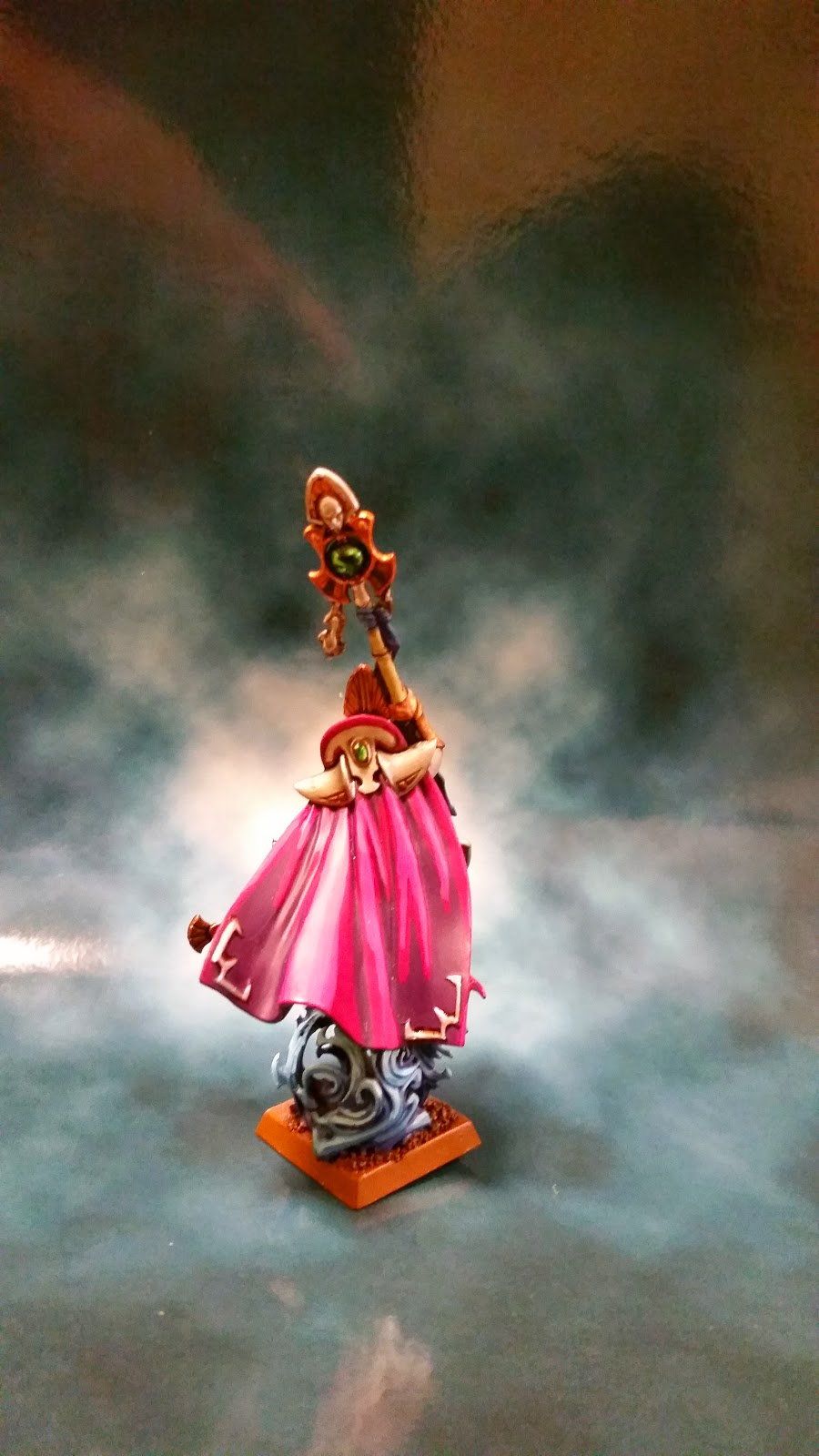 Unlike most of my models where I just let the wash gather in the eyes, I had a go at painting eyes for this model. Although difficult to see in these images they turned out better than I had hoped.

I watched this video on "How to Paint Eyes" by AG Productions on YouTube to help me get started:

x2  Great Eagles (only one pictured below)

These are the Games Workshop direct models, so they are metal. It was a bit of a challenge to assemble them as the glue I had took a long time to fix the wings in place (they are really heavy!) and I had to use Green Stuff to cover some gaps (I've heard the Lord of the Rings plastic eagles are a lot easier to work with and look better!) 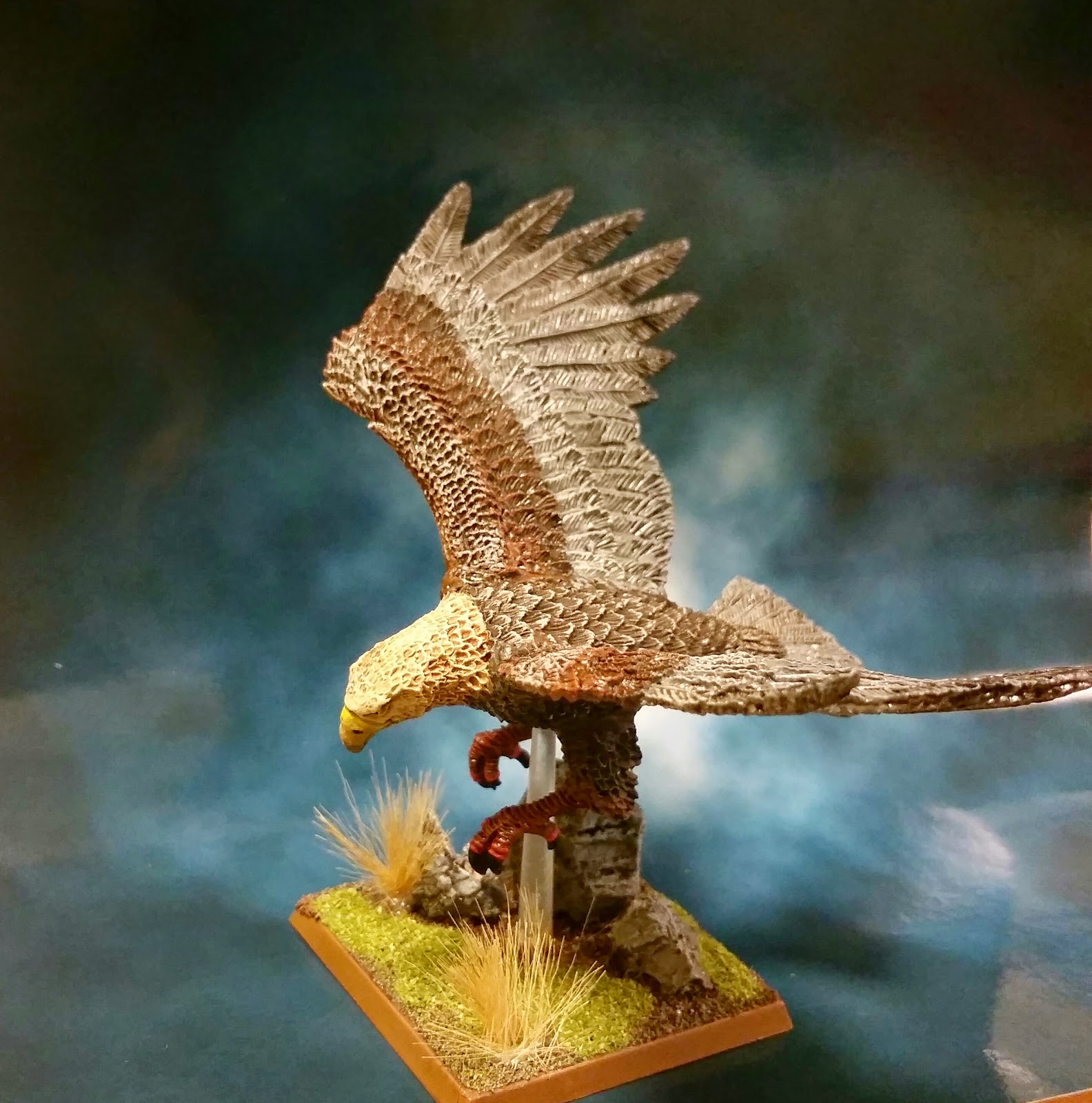 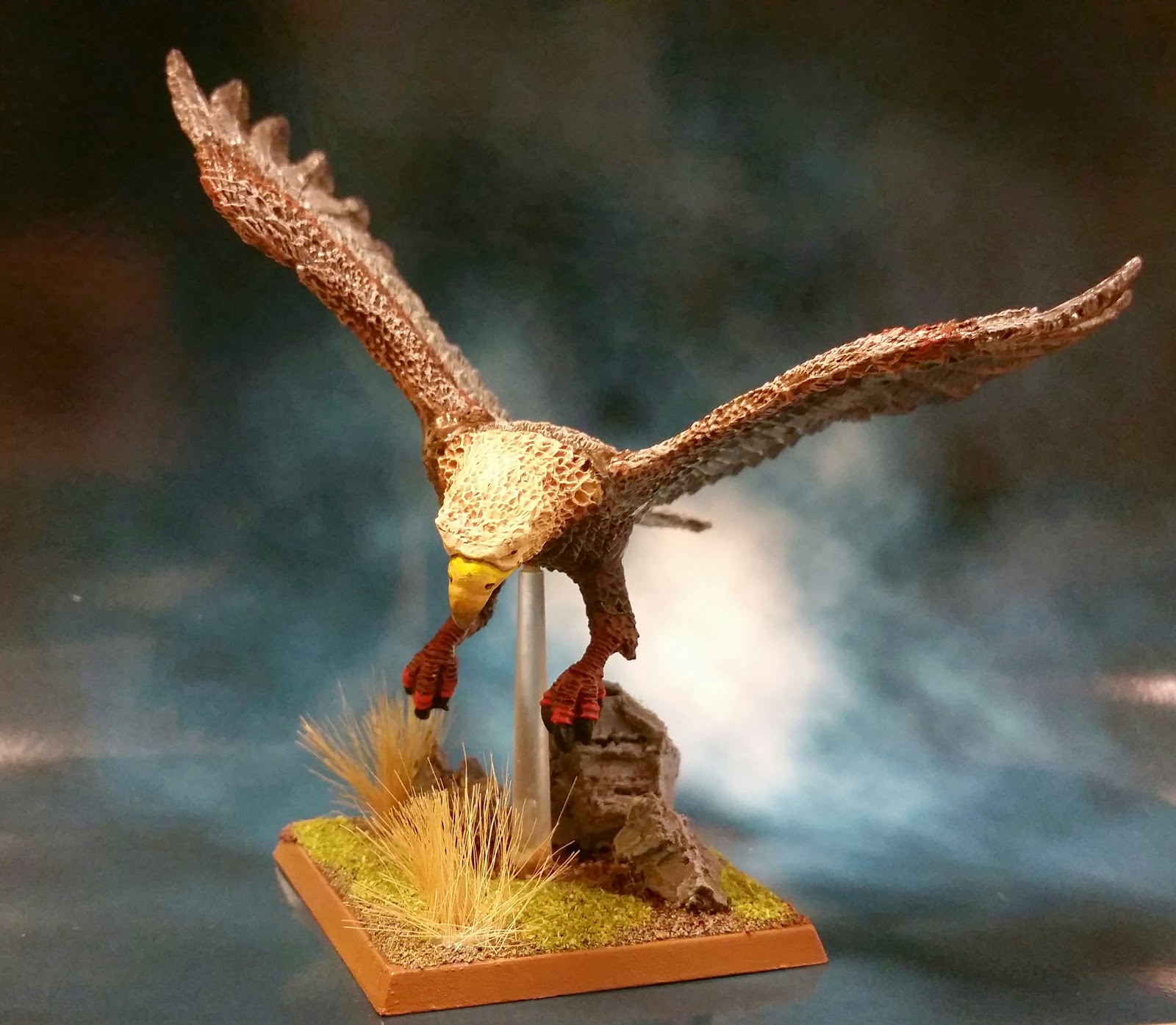 As I was in a big hurry, I simply did undercoats, Agrax Earthshade washes and then drybrushing. I had my first bad experience with Agrax Earthshade, (in a good few years of using GW washes) which was that it dried glossy! (I think this was because I used too much, OR because I did a second wash of the same colour before the first wash was dry? You have been warned)

Either way it ruined what I was helpful would be a good model!
As I was out of time (just an hour or two from having to leave for the game) I did more drybrushing all over the model to make the shiny parts less obvious. Overall I think it worked and the Eagles are fine to use.

I use broken up wine corks to make the rocks!

In my next post, I will include some pictures of the White Lions.