Decades of practice gave an almost preternatural speed in his incantations. Like his brethren, he had mastered the words of the litany and their meaning decades ago, a feat that had itself taken decades of earlier work under the watchful eyes of the chapter's senior technical staff (how he had hated Master Scribe Fleer in those days!). Unlike his brethren safely working in the sheltering gloom of the hangars of the Grand Crusade in orbit however, he now found himself in the unenviable position of having to bring an honored vehicle to life from a critically-damaged state, and with their enemy just over the horizon.

Acutely sensitive to all things mechanical, Adolphus felt the signal microseconds before it was emitted as an audible warning from the servitor-mounted vox standing just behind him. It took but a split second more to realize that this signal could only be triggered by an unidentified contact approaching at high velocity.

With a thought, he slaved the servitor's sensors to his own optical display and simultaneously silenced the living automaton's vocal unit, the better to focus on the job at hand. There could be no interrupting the litany if he was to succeed.

As far as he knew, there were now no operating Imperial guard or chapter air assets operating in this sector to give them cover. Despite putting up fierce resistance, they had been overwhelmed in a matter of days. What remnants there were had been pulled-back to protect cities or manufactorums of worth, while smaller ground-based units - like the one he was attached to - had been left to slow the enemy (or abandoned, depending on your point of view).
To make matters worse, he now remembered the subject of his litanies was a Whirlwind, rather than a pattern designed to engage air threats, such as a Hunter or Stalker.

Despite knowing the servitor had no real capacity for thought of it's own, Adolphus couldn't help but be impressed by the lack of emotion in the voice in his head when they were both but a mere 14 seconds from obliteration. However, knowing that the machine-spirit would be less likely to respond to his requests if adulterated with impure thoughts or such petty considerations as his own mortality, Adolphus swept such thoughts to a section of his cybernetically-enhanced brain that the machine should have no wish to enter...

...and, as if in agreement, there it was!
A light, trembling hum ran through his fingertips and palm.
Slight...
...but yes it was there...but Praise the Emperor, so weak!

Eyes pressed closed, sweat dripping, Adolphus slid his finger under the groove of the access panel through which he had felt that slight spark of life and flipped it up. As though guided by the Adeptus Mechanicus themselves, his fingers rapidly tapped out the sequence his brain struggled to pull in front of his eyes.

Servo-motors whined as the optics and targeting ring whirled to face into the distance, their banks of red optics lit from within, and the massive arms containing the twin pods snapped skywards,

and then everything,
all thoughts
all fears
all hopes - were shredded and ripped away as multiple missile engines exploded into life. Intrigued, Adolphus subconsciously activated his embedded ocular filters before opening his right eye but a fraction. Through the dust and grit in the air (Whirlwind was surely an appropriate name) he caught the first slender form streak away, almost faster than he could follow, then only moments later all ten others were gone, leaving only empty smoking tubes.
Choking on the acrid smell of ignited fuel, he looked up at the evening sky. Already the rockets were but pinpricks of light - lethal stars - on their way to the heavens, seeking their prey like lethal, supersonic serpan...

...a blast unlike anything he had known before blew him and the servitor off their feet and directly into the huddled troops behind, searing the image from his mind in a white flash.

Spurred on by the curses of those he had landed on, he struggled to his feet.

Forcing his eyes to focus in the direction the flash had come from, so close had the enemy flyer come that he didn't even need to summon ocular magnification to see the impressive white and black cloud of destruction that was all that remained of the foe. Just a few microseconds more and the flyer would have released whatever unholy payload it had carried directly upon them.

"Praise the Emperor!"
The cry erupted around him. He felt himself being patted and touched by those troopers who could still rise to their feet.

Exhausted despite his euphoria, Adolphus leaned over against the cold metal of the Whirlwind missile launcher. He gently reached out, resting his fingers against the panel through which he had launched the barrage.

The machine was silent - no hum of life remained. Straining against his exhaustion, he lifted his head. The targeting ring optics too were lifeless, no glint or inner hint of life remained.

Head lowered, Master Technician fell slowly to his knees, folded his arms, and began the Chant of the Fallen.

The Whirlwind is one of my favorite space marine vehicles. I've decided to give painting infantry a break and head back to vehicles, and I have two Rhino/ Whirlwind chassis that I can work at. As my occasional opponents here are very casual, I don't think any of them would mind if I did proxy a Whirlwind as a Hunter or Stalker. These two models therefore add lots of variety to my Black Templars army.

Here is how they look now. 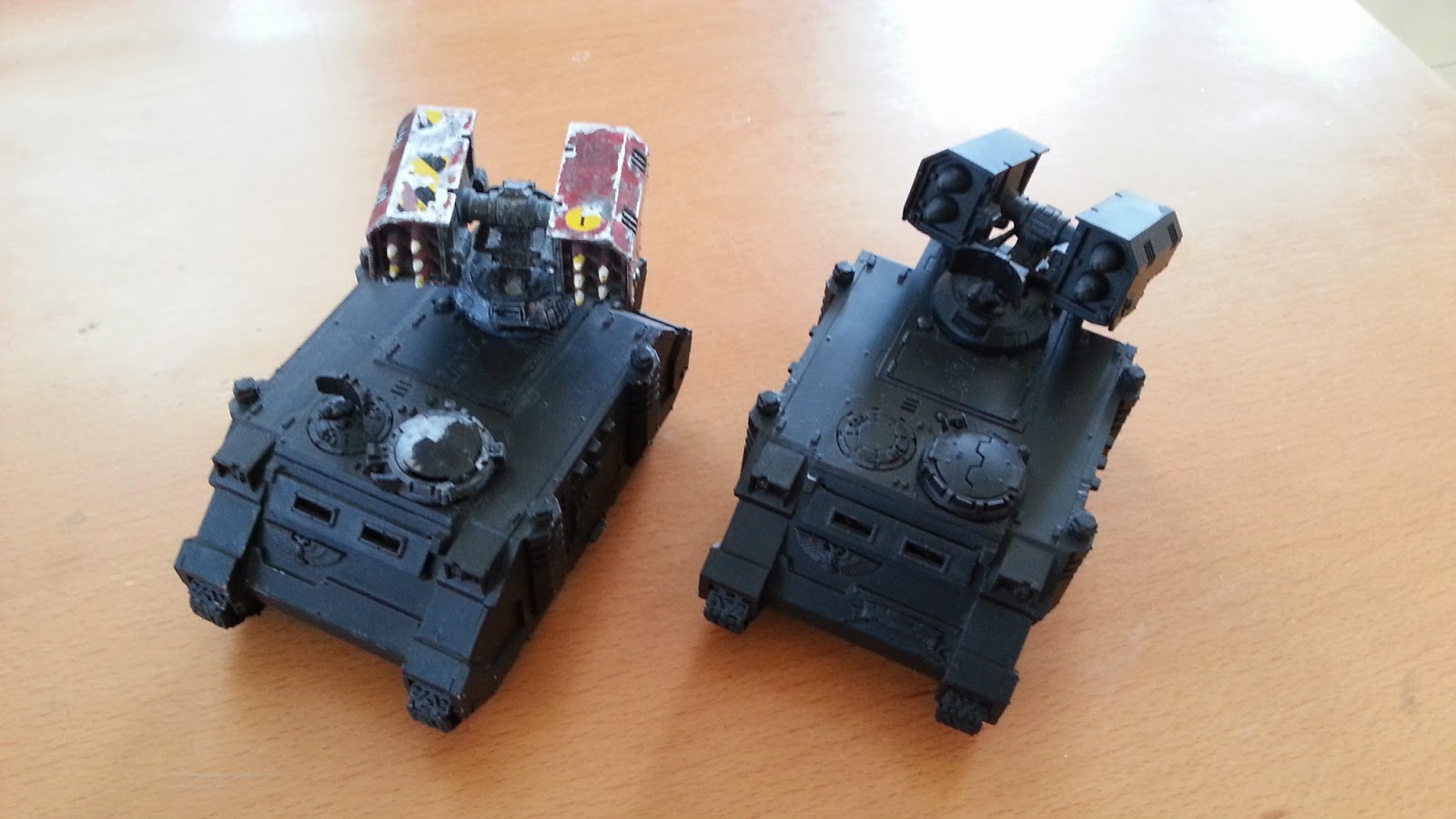 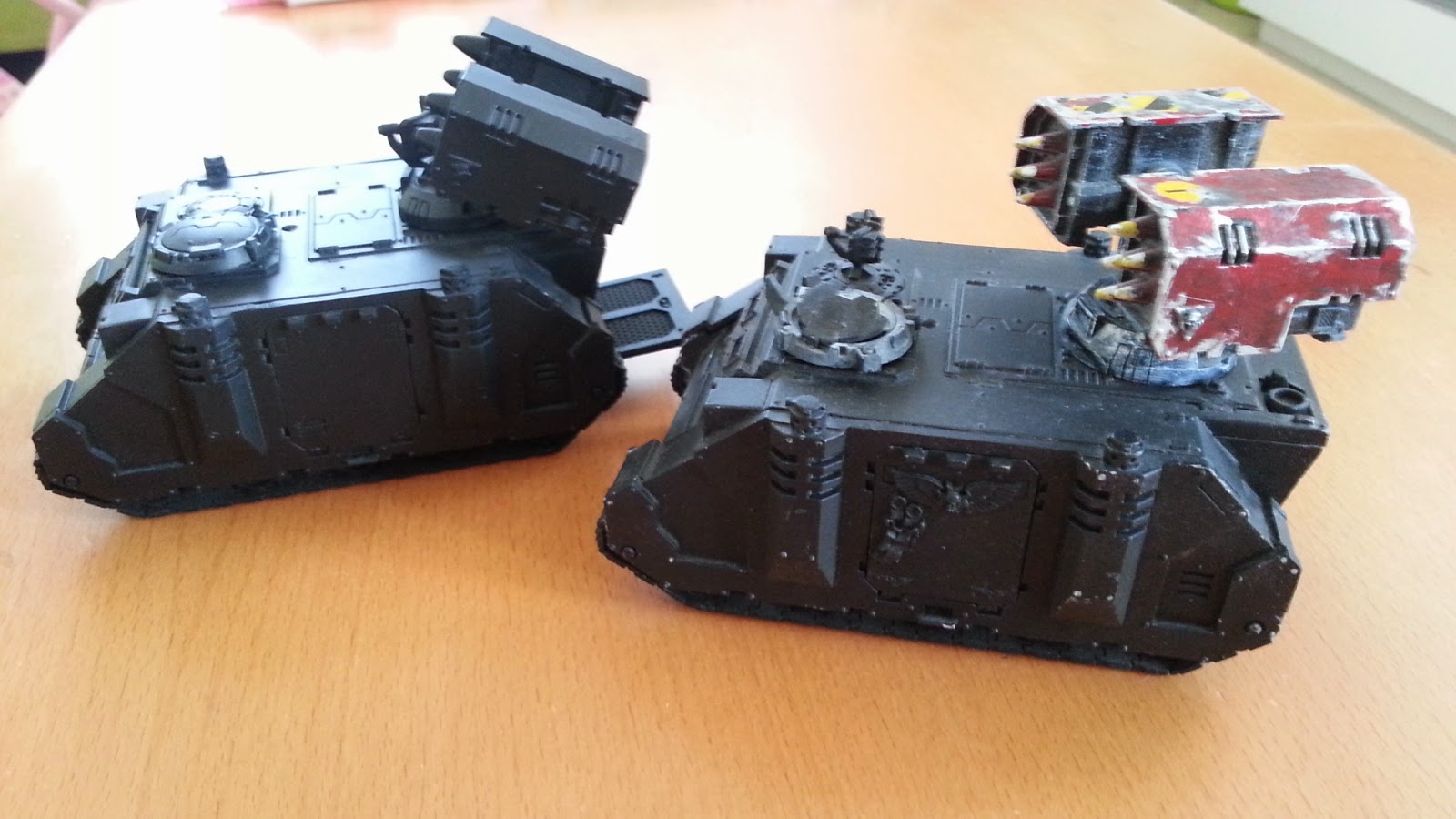 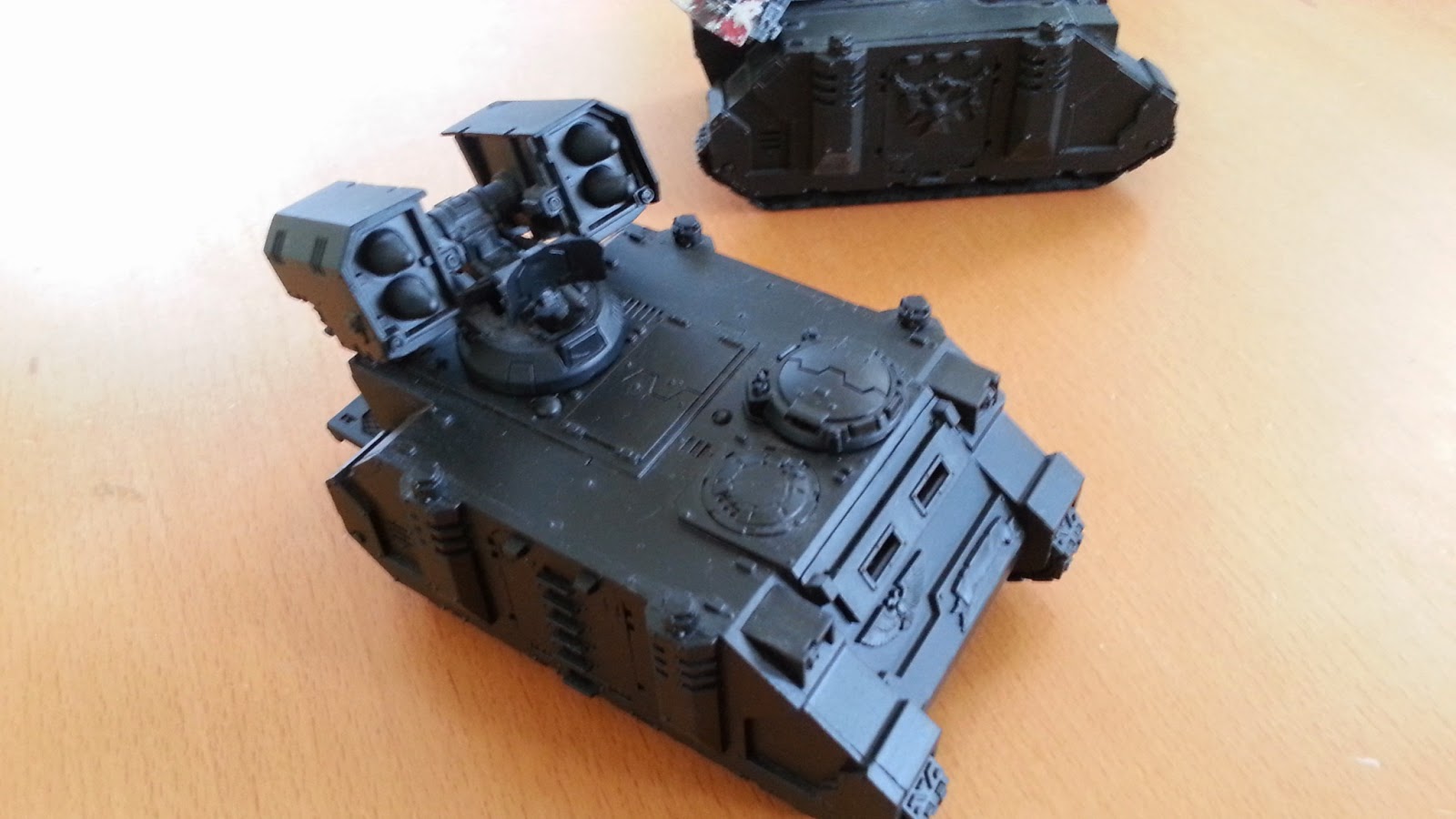 The red missile launcher housing came in this state from eBay and already looks heavily weathered. In keeping with the weathering I have been doing on other vehicles, I am tempted to keep that look and run with a similar design on the second tank.