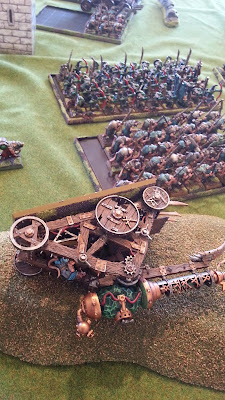 
As it may take me some time to finish up my most recent battle report, I thought I would cut to the chase here!
These are a few things that came to mind after my most recent battle. They aren't all of benefit to the Skaven Warlord, but in the interests of fairness in a friendly game these things are important! (in my gaming group, friendly players will often offer you a chance to take a forgotten role etc. This is lovely, but makes me feel even more guilty of I then roll well!)

These are things that I think in the excitement of a game with other inexperienced players if it's easy to forget (and I did!)


1. You rocked your painting (and your budget) to bring a Screaming Bell...

... so don't forget to ring it! Remember that it gets rung at a very specific time (sorry, don't have my Army Book with me at the moment). More than once I forgot to ring it at the right time (if at all!)

2. Plague Monks are awesome in Close Combat because they have Frenzy...

...but Frenzy doesn't only apply in CC! Remember that (if I have it right) they have to try to charge the nearest eligible enemy unit in the charge phase, even you don't want them too! (Or something!)

3. Plague Monks are awesome in Close Combat because they have Frenzy...

...until they don't have Frenzy anymore.
Situations include: losing CC, not being in the attacking front ranks etc. (or something!)

...and you have them, not only on models that would obviously terrify anyone (e.g. Hell Pit Abomination) but also on high comedy value warmachines such as your Doomwheel.
Also, don't forget that the effects of these rules apply in Close Combat too (is that right?).
Don't forget to do a check each turn of CC. Your Doomwheel is precious, and it may last longer if you get it out of CC with enemy Chaff units (yeah, yeah, I know I shouldn't have been stupid enough to let it get caught by enemy infantry in the first place!)

5. If the enemy is a cannon-toting, black-powder lovin' kinda guy or gal, (I'm looking at you Dwarves and Empire)...

...consider not taking a Screaming Bell!

Instead of rockin' up to the party with mega large juicy cannon-bait, instead consider putting your Grey-Seer in a block of infantry.
(thanks to an anonymous poster for this tip previously - very true!).

6. If they dropped an Organ-gun on the table, don't setup anything within 24 inches (I think that is the range).

These will be auto-hit. Forgetting this is a dead easy way to lose scouts (such as Gutter Runners). As in dead, dead, dead.

7. Excited by finally getting that block of 50 "counts - as" Goblin Skaven Slaves into combat for the first time?

...don't forget then that you can blast/ burn and gas that block of slaves with your warmachines and weapons teams in order to take out the unit it is fighting. You will take casualties, but so will they.
(*hangs head in shame* yes, I forgot to sacrifice their lives several times)

8. "Oooooooo, look at all my lovely rats lined up for war...

... now, how am I going to get them across the table in an orderly fashion!?"

Skaven armies MUST bring a lot of bodies to the table (a strength) but "with great numbers of troops comes great responsibility for deployment planning" (or something). With even a few bits of terrain on the table, you could well get into a tragic traffic jam, delaying the arrival of your best troops, or hampering charges etc.
So think carefully in your head about not only who will fight where, but how are they going to get there, and in what order?
Literally, good deployment could win you the battle and bad deployment could almost certainly help you lose it!

To all you experienced Skaven Warlords out there, what lessons would you pass on from your own experiences to your comrades?

(I know of course that no TRUE Skaven would ever pass on a winning tip to even another Skaven, but think of the greater future of our race!)

P. S. Sorry if the post is formatted poorly, but I'm writing and posting this on blogger mobile.
Posted by Oddjob at 8:23 PM