Hey everyone, been working on adding a High Elf Battle Standard Bearer to The Purple Sons. I think he is ready to join up so here are a couple of pictures. (Not good ones. These were taken at night and then I messed around with them in Picasa.) 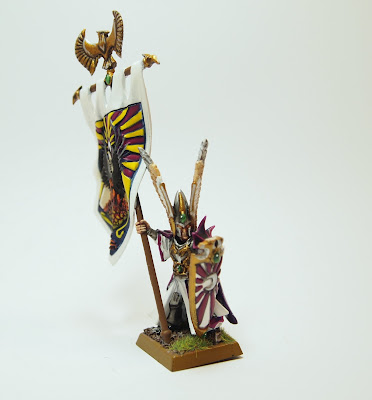 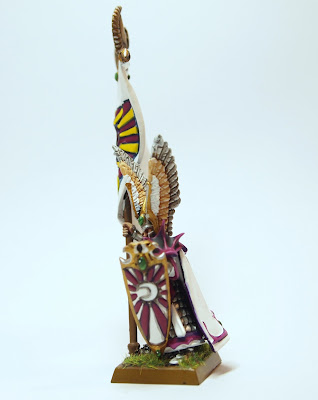 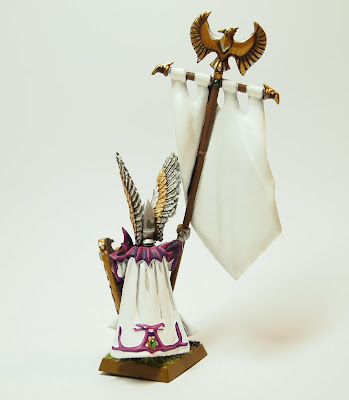 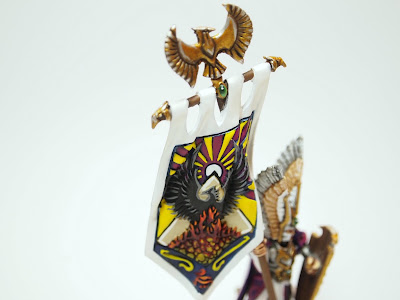 It took a few nights to finish this BSB. As you can imagine, there were two things that took a long time.

I have nearly finished my pot of Skull White, so it looks as though I will be coming into the new Ceramite White soon (if my wife is reading this, it is Father's Day in Japan this coming weekend hint, hint). Sadly, that won't be in time to help reduce the time it took to do these layers of white (don't ask me how many I did. I lost count midway through the process!)

Having collected mainly Skaven I have never had a BSB where the army heraldry was moulded into the standard before.
On the one hand, it is a really nice design (credit to the scuptor - sorry I don't know their name), on the other, it is pretty complicated to paint AND it is different from the rest of my army.
Now of course, with a bit of work I could replace this banner with a generic one without a design, so I am just being lazy.

It is a shame the colours in the photos suck, because the eagle at the top of the banner actually turned out much brighter than this. I used a Calthan Brown/ Shining Gold mix as the base and a Devlan Mud wash, followed by pure Shining Gold highlights.

A Noble with Battle Standard - that's another 110 points added to The Purple Sons right there!