As well as painting and playing Warhammer, our gaming group likes to play boardgames and try different systems. We have at least one "serious" boardgame addict collector who (luckily for us!) has some great games, so I've had the opportunity to try games like Lords of Waterdeep, Pandemic, Zombicide and Dead of Winter. I've also collected a few different games such as X-Wing and Dust Tactics, While other friends own games like Werewolf.

If you don't know Gloomhaven, the first thing to know is that it was released in 2017 or so and immediately took the boardgame community by storm thanks to its huge amount of content and mix of game mechanics. Many have said that it isn't necessarily innovative, but that it brings together many different mechanics into one smooth package. It is also a "Legacy" game, meaning that it is intended to be played through as a campaign once, and then finished. Game characters will level up and retire, while other new ones will be introduced as part of the story. (You can play the game again of course, but you just need to bear this in mind as you go through, thinking about when to not use stickers or rip up cards that are used.)

The second thing to know is that this game is HUGE. The box is huge (about 10Kg), the story is huge (100+ hour campaign?) and the amount of stuff used is...HUGE difficult to manage!
Here is what you get:
...and many thick card floor tiles, obstacles, traps, terrain and more. For this reason a whole industry has sprung up of Gloomhaven box "organizers". These are often MDF kits (some assembly required) that fit into the original box and keep all of the pieces together. The benefit of this is that setup of a game can be reduced from more than 30 minutes laying stuff out to just a few minutes.
The downside is the cost.
Although there are many variants and manufacturers, the nicest ones are 60~90 US dollars. At the higher end that is almost as much as you might pay for the game itself. At the very reasonable end is something like the excellent Y.A.S.S (Yet Another Storage Solution), full information for which you'll find on Board Game Geek. YASS uses Plano boxes/ tackle boxes and users have created inserts to help the user find the monsters.

As I'd just spent more than 100 dollars for the game, I didn't have any spare cash for a nice organizer. So, inspired by YASS I headed over to a 100 Yen shop (I live in Tokyo) to see what I can find.

I quickly realized that directly copying YASS wouldn't work as the storage options on display were different. However when in the store a Google search led me to a Japanese Gloomhaven site that really helped me. Hats off to "Shiro's Boardgame Room" and the excellent post there on using 100 Yen goods to organize his set (without this post I would have been lost and much more trial and error involved.) If you don't read Japanese my variation on the ideas there are below:

What did I get?
Below, I'll go through these one by one. The dimensions are provided, but if you have something within a couple of millimeters you should be fine. 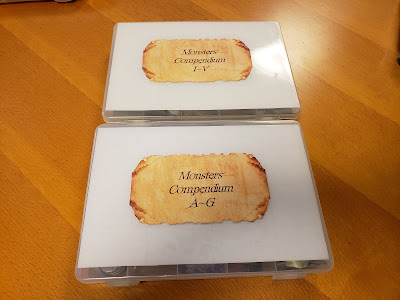 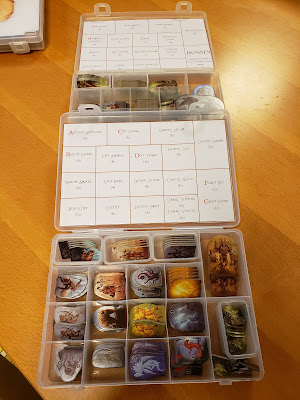 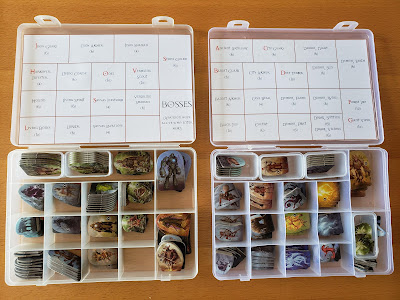 As you can see, these boxes actually have 15 compartments and then I used the pill boxes to subdivide the larger compartment at the top into a further three. This allowed me to store more monsters. NOT perfectly in alphabetical order though, as some monsters can only be accommodated in certain areas of the box. Still I think this will help. (See below for more information on pill boxes).

(23.3 x 17.0 x 3.4)
This used the "Sicari 10" mentioned earlier, which has ten slots. I used this for the larger overlay tiles and monster and character stands. You can see in the second picture below that I made one cut to allow the large x3 tile "Hot coals" tile to fit in snugly. 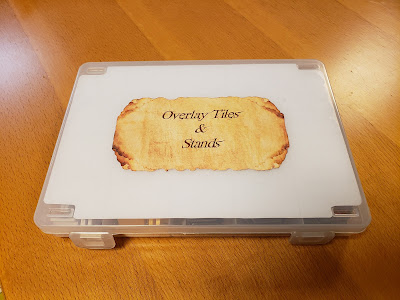 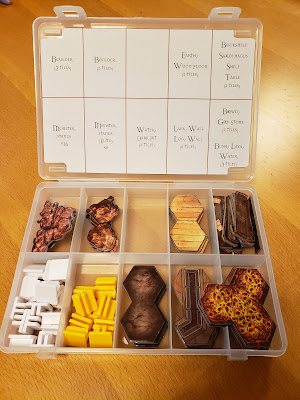 (19.9 x 13.4 x 3.7)
This includes a variety of tiles that wouldn't fit elsewhere (e.g. treasure) and all the various status tokens like Poison, Strengthen, Wounded, etc. 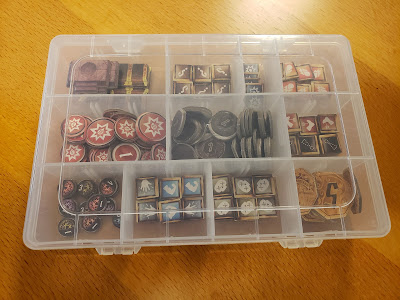 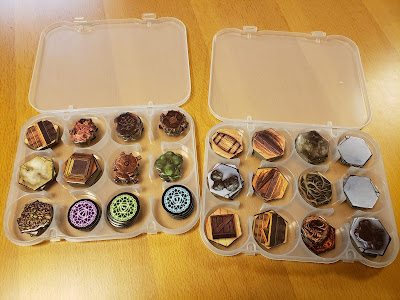 (11.4 x 6.4 x 3.4)
I bought x3 of these, as they are so useful. You can cut each up into x3 smaller individual boxes, or use them as a set of three. I used x1 set of three as an overflow to store anything that wouldn't go anywhere else. Here is an image: 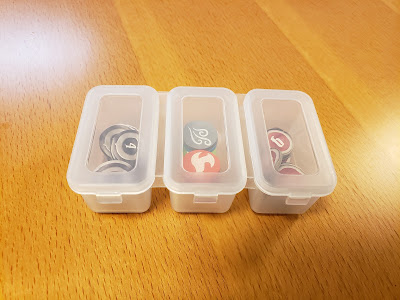 I found some "Old parchment" style images on Google, imported these into a Word processor (I use the excellent and free LibreOffice - give it a try!) then added some text using a font I found here called "FairyDust". This is an OpenDocument format (ODT) that you can download here from Google Drive. ODT files should open in later versions of M.S. Word (or download LibreOffice!) 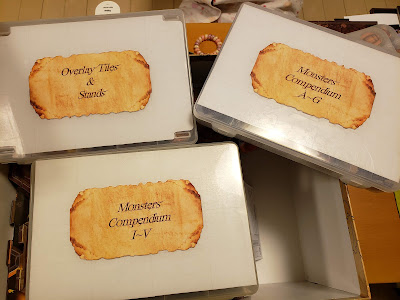 Using the same system I created a table in the document, customized it, and added monster names as alphabetically as possible, highlighting the letters to help me find monsters more easily for scenario setups. I then printed and cut these out and stuck them on the inside of the box lid. 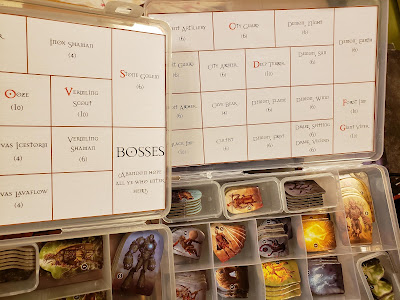 Finally, I also used "drawer organisers" to help me divide up the space in the Gloomhaven box and allow vertical storage and separate of cards. Originally designed to help you tidy up your desk drawer, there are supremely flexible. They come in packs, which you simply break up to the size you want, then slot together. 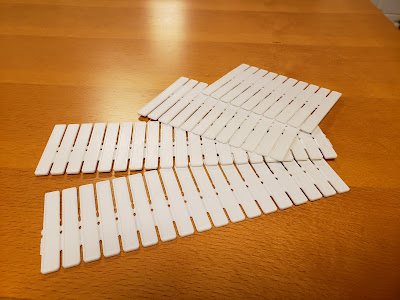 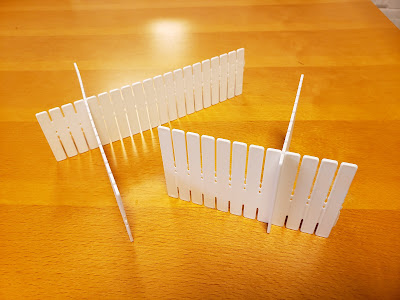 Here you can see how I organised my Gloomhaven box using these: 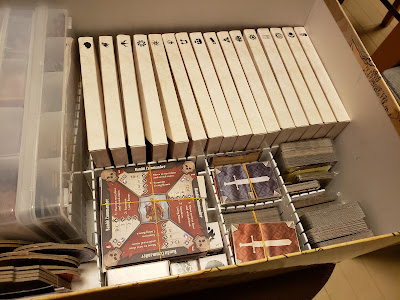 So here is how everything fits together. If I include the rulebook and scenario book the box will close, but not quite all the way. It is about a centimeter or so from the bottom of the box. Good enough (IMHO).

Voila! Even if you can't get the exact same materials I did, I hope this will provide a few ideas for approaches that you can apply to your Gloomhaven box.
Thanks for reading.
:-)