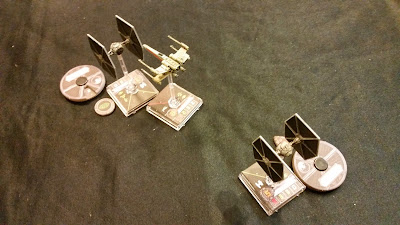 I've had this game for a few months now but never really found time to write about it. With a couple of games (literally) under my belt and some reinforcements having arrived, I thought I would put some thoughts down.

Sure, it's so popular that many tabletop gamers will have tried it by now (just Google the game to see a huge list of enthusiastic web sites and resources), but perhaps you are a casual gamer, (like me)?
Or someone looking to get into games for the first time?
Or hey, just late to the party?

If so, I hope this is helpful.


Basically, are you looking for an easy to pick up and play miniatures game?

If even half of those things sound good, then this game by Fantasy Flight Games could be worth looking into. Here is why:

Sounds good right?
Seriously, the models look great, setup time is minimal (remember, I'm used to painting close to 100 individual Skaven models to start an army) and the system is easy enough for my ten year old daughter to learn (and to love!)
It can only be a good sign when your kids ask you to play again due to the excitement produced by the simple mechanic of planning your moves at the same time (rather than planning your moves in response to what the player did on the turn before yours, as is common with games like Warhammer 40K and other games.)

It is also a very cinematic game - she loves the fun that comes with using ships with characters from the movies (the starter set includes Luke Skywalker, and "named" characters are purchasable as part of the expansions - Darth Vadar, Han Solo etc.)

In addition, the popularity of the game means there is a very active community, with lots of advice and help online. If you like digital bits and pieces too you are well served. I haven't used them in depth, but here are some tools that I have found interesting to play around with:

1. Fantasy Flight Star Wars Dice App. (Not free, but worth the 500 Yen IMHO as it covers every Star Wars game they produce, has nice production values, and is cheaper than the very necessary second set of physical dice.)

2. X-Wing Squadron Builder. (Free). Simple to use, has the basic functionality you need. There are plenty of list builder websites out there, but I like this one as it is an app rather than a website. You can find an excellent article on all kinds of software tools for X-Wing over at the X-Wing Miniatures Game Community Blog

By this point, you may be asking if a game that is a simple as this one sounds will keep you engaged...


As well as the x2 Tie Fighters and the x1 X-Wing model in the core set, the game is kept fresh (and deep) by regular new releases, which come in "Waves" (the 8th of which has recently been announced).
You can see a few above - The Millenium Falcon and Slave 1. These expansion sets are not cheap (14 US to 100 US before discounts at retail) but they come with a variety of cards that add a great amount of strategic depth to the game by changing the abilities of the ships (pilots with different skills, upgrades that can be used with different ships, droids etc.)

NOTE: Many players recommend that the best investment you can make after the core set, is...another core set.

A solid list-building system for fair-play as you grow your roster of models/ ships.


These cards, along with the ones that come in the core set, allow you to create squads (lists of starships that fight together) of various strengths and weaknesses. Using the advanced rules (part of the free rules) and some of the digital list-building tools widely available, you can easily create lists within certain points values within a few minutes.

As an example:
Want to be the Rebels? x2 X-Wings with Chewbacca flying the Millenium Falcon with a few upgrades will be close to 100 points.
Imperial? Approx 100 points would be x3 Tie-Fighters (1 being flown by a famous pilot) and Slave 1 with a couple of upgrades.

With so many cards available, there is a daunting amount of options and lists that one can build if you want to (as evidenced by this list - kudos to MajorJuggler!), as well as...


...that seems to be going global. I'm not into competitive play at all, but you can find out more here.

Although I haven't played much, I'd give this game a big thumbs up, and recommend it highly (as if you couldn't tell) to anyone looking for quick to start, low investment game. I'm looking forward to my next games and trying out my new models (even if I only have a few second wave ships, and I'm a bit worried that I'm going to lose yet again to a 10 year old!).

What are your experiences of X-Wing?
What downsides have you found to the game?
What models do you have?
How are you finding the later releases in terms of fun and competitive play?
Posted by Oddjob at 11:21 PM