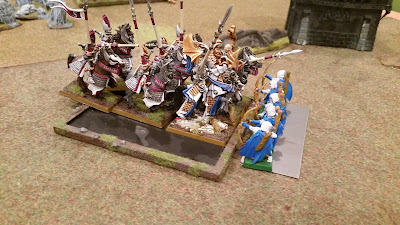 Simply the only word to describe the High Elf v. High Elf rumble that happened the other week. We had arranged to fight with 2,000 points of "whatever you want to bring" and guess who turned up?
Some other traitorous High Elf faction!

This was my second time out with my "Purple Sons" army. Here is my list:

...and Lore of Light on the level 1:
Fiery convocation.

Magic: Lore of Life
Throne of Vines, Regrowth, and others!

What you will notice is that neither of us really bought a lot of High Elf "Toys" with us. Our group is quite casual, and so it is quite common for people to just use stuff that isn't very "popular" for a laugh.
Case in point when looking at the lists above:
1.) No Frostheart Phoenix in these lists.
2.) No super-hard characters. As you can see above, Eltharion isn't really tooled up too heavily.
(Yes, we both brought Banners of the World Dragon and Books of Hoeth but hey, who wouldn't these days! )

In my group, we are pretty casual players, so I was happy to play an opponent who has a lot more experience than me and is happy to share his wisdom (as this was my second time using High Elves). Of course, this also benefits him in the long run, as he will get a better game each time, but still, I appreciate it!

Key moments in the Battle: 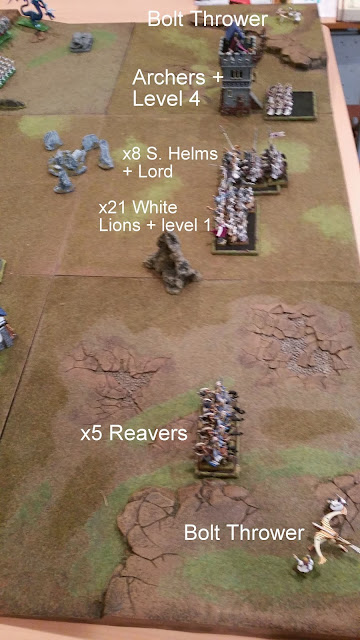 A couple of things helped me later in the game.
a.) I got the side of the board with the watchtower, allowing me to move my level 4 and archers into the building: 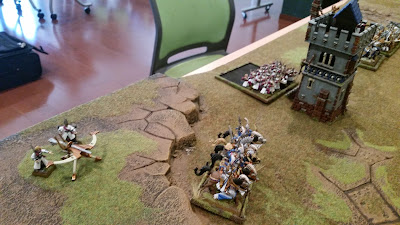 b.) I put my two bolt throwers on opposite sides, meaning he would either have to divert some forces to deal with the opposite flank, OR take some finely-crafted, character/ monster/ cavalry-killing bolts of Elven death throughout the game...


Lots of archers, and a big block of Sword Masters in the centre with a Level 4. At the bottom of the photo above, you can see the two blocks of cavalry that are hoping to make short work of my bolt thrower across the board.

Key moments in the game:


Reaver Redirection:
While learning to use my Reavers for the first time (hey, Skaven don't have fast cav right?) I managed to divert the incoming cavalry that would have toasted one of my Bolt Throwers. It took my opponent several turns to deal with that flank, diverting his forces from the main battle at the centre. 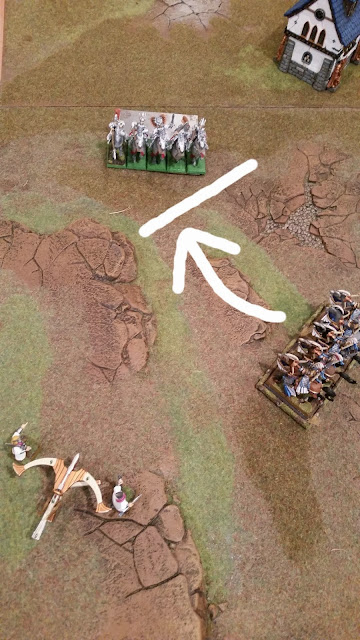 Swordmaster Slaughter:
In the centre, the first part of the battle turned on the Swordmaster v. Silver Helms and White Lions throw down. There was a ton of bloodshed, augmented by magic buffs on both sides, but in the end, the Swordmasters, despite their bravery, couldn't beat the White Lions and Heavy Cav.
Winning this netted me 718 points, because his Wizard was in this unit as well.. 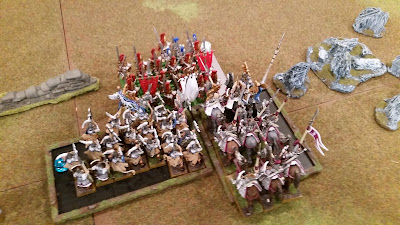 .
Eltharion takes a Tumble:
Previously mounted on Stormwing, the Elf Prince has to walk into battle after his trusty steed suffers some unlucky hits and dies. This severely limited his mobility on the right flank as he sought shelter in a block of archers, meaning my Bolt thrower was now threatened by only his Cav.

His Revenge
After losing his main block, my opponent gamely fought on, bringing his archers forward into combat and moving his remaining cavalry in en masse. My Silver Helms and Prince took care of the first block of archers, but then found themselves way in front of my White Lions when they chased the archers, and now faced by Eltharion, a full block of archers, and two (regenerated) blocks of Dragon Princes...

Finale
In the end though, the White Lions come up and finally, finally, Eltharion goes down. I can't remember if that was to the Silver Helms or the Lions, but he had survived (with a truly awe inspiring set of saving throws) massed bolt thrower fire (again and again and again), magic, and hand-to-hand combat!

Result? Victory to the Sons of Xereus! 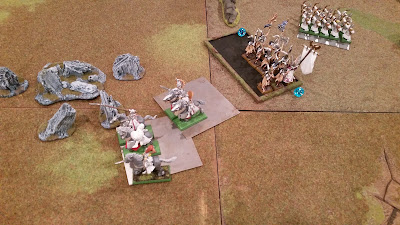 
This was a fun battle, in which I learned a lot from the experience of just using the army and the opposing general. Next time, I have a feeling his list will be a little more...
...hard core!
:-)