...or "Getting dirty with Black Templar Heavy Support"

After recently having a go at weathering some Black Templar vehicles that I purchased on "the bay", I decided to really go for it and try something new by learning how to add mud. I have made stuff look used before, most notably my Tau Riptide, but I haven't muddied stuff up.

Here is how they turned out: 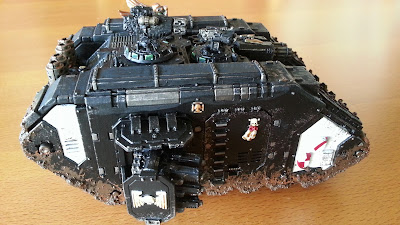 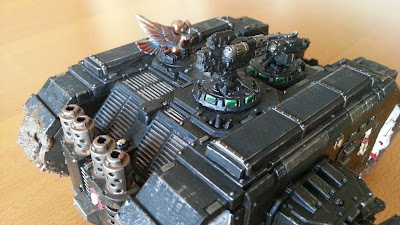 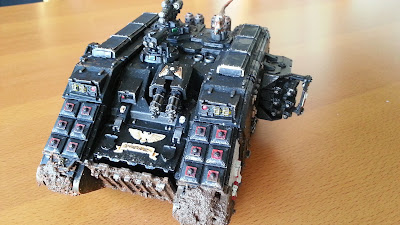 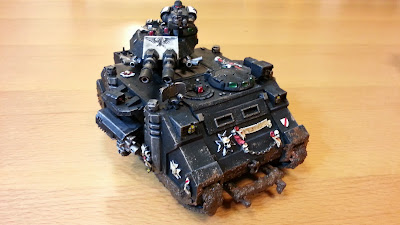 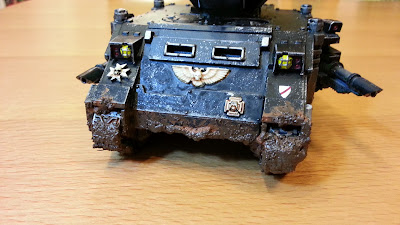 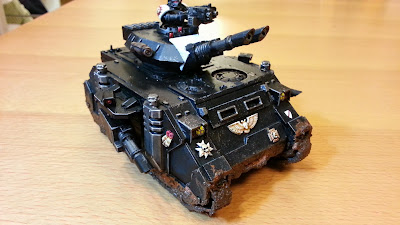 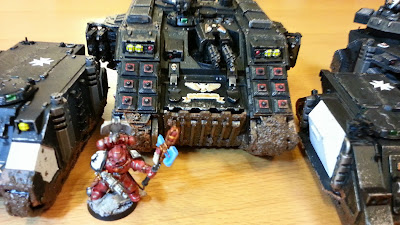 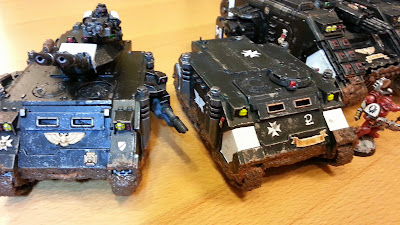 You can find lots of videos and information on the web on how to go about this, and there are a variety of techniques, ranging from very simple to a little complex, depending on what tools and resources you have to hand.

I watched this video by MarneusAugustaCalgar:

This suited me down to the ground, as I don't have access to some of the weathering pigments used to such stunning effect in other videos, but I do have modeling sand, gloss varnish ("GW 'ard Coat"), old brushes and a load of brown paint (left over from painting a battlefield).

You can see the technique in the video (I substituted modelling sand and brown paint for actual earth) but the simple steps are:
1.) Pour modelling sand into a container.
2.) Pour paint into modelling sand.
3.) Mix well.
4.) Add gloss varnish.
I mixed up a big batch, because I was going to work on 3-4 vehicles in one go.
Once you have done that, follow the video and set to work (accompanied by the right music of course!)

a.) Don't be too precious - get it on there in among the bogies for the tracks and anywhere else you want mud!
b.) Use an old, unwanted brush. Even if you can clean it later, the bristles are going to be ruined.
c.) If you are doing multiple vehicles, don't go too slowly! The varnish dries quicker than you might think, so the mix becomes unusable in quite a short time.
d.) If you turn your vehicles over on the tabletop when they get destroyed, don't forget to do underneath as well...

If you want to, then do the process again, but this time using a darker paint. I think it looks better to have a couple of different colours. Also, I think the darker paint on top shows that this mud is "fresher", while the lighter colour has dried. You should do this to your own taste, but you can get a sense of this above.
I like this technique because it is simple to do, fun to try, and it really adds something extra to the vehicle. I also quite like the gloss effect (although there are plenty of people who don't!).

Some useful feedback I later received from the excellent model painting communities on Google+ included...

1.) ...I have too much mud on the actual tracks themselves - the tracks are always moving, so they actually would have LESS mud on them because the mud falls off.
2.) ...consider adding modelling flock to the mix. This can help to give the impression of churned-up turf/ grass (I don't know how much you would add though).
3.) ...if you don't like the gloss effect, consider using Matt varnish, or later adding a wash.
(I can't remember the exact words, but a big thanks to everyone for the input!)

These vehicles actually aren't finished. There is lots more detailing that I would like to (should!) do, including drilling out gun barrels, further highlights and drybrushing etc. but for now, I reckon these guys could bring some rolling thunder to the table!

Thanks for looking - all comments and constructive criticism welcome!
:-)