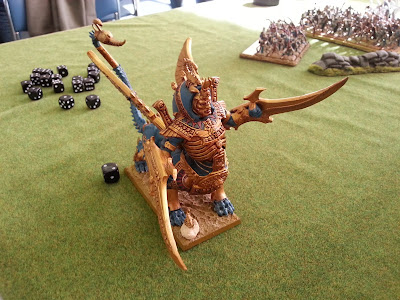 Grey Seer Nemo rubbed his paws together and sniffed nervously at the air.

"The Great Horned Rat watches" he muttered, "...so this challenge must be answered".

The "challenge" he referred to was the alarming proximity of many, many, dry-dead things around the fabled Great Green Stone.

He could see it now, a huge chunk of warpstone on the battlefield where it had fallen many hundreds of full-moons ago. The Great Green Stone held a dread fascination to the Grey Seer (as it did to all his kin). Long had he coveted it - aside from the unfortunate fact that it was located next to an Elf-thing's tower, he felt sure that he and the local Warlord would have carried it into their tunnels moons ago (at which time the Warlord would surely suffer a mysterious accident...leaving the great stone to Nemo alone!)

Although finding it difficult to turn his eyes away from such an enormous potential source of wealth and power, the Seer managed to drag his gaze to his enemy, arrayed in silent (VERY silent) ranks across the battlefield. The seer had never fought these dead-things before (in fact, he avoided fighting wherever possible) but the twitching in his whiskers and the fur standing up on his back told him there was much dark and powerful magic at work among the enemy.

Hearing a sudden increase in the squeaks and critters from the Clanrats gathered round to protect him, he looked again across the field. The enemy was moving as one, in perfect silence, and in perfect step, towards them.

Closing his beady eyes, he began to recite a prayer to the dark, horned Lord...

This was my second ever game of WFB. It has been a long time coming, as I really only painted models the last couple of years and I had much more opportunity to play 40K. As you will have guessed from above, this was a Tomb Kings match-up at 2,000 points. My opponent has 3-4 games under his belt so like me had little experience. This made for a fun game, with lots of chances to review the rules - although with both of us checking all the time it was quite slow (fine by me!)

Not having much experience as a general, there isn't much I can comment on in this list, aside from to say that I believe it was purchased as a set from another player. That might explain the lack of some of the more common items one might expect to see in a TK list, such as a Casket of Souls, and the relatively low number of archers?

Next time I will post the battle itself, so come back again! 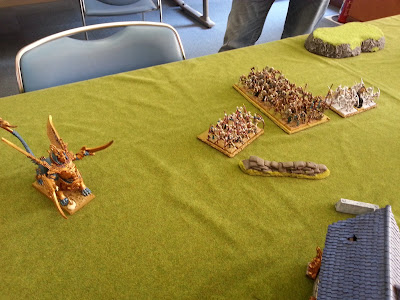