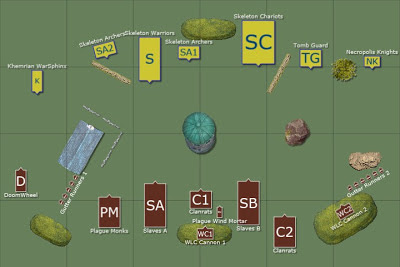 I have to apologise for the time it is taking to finish the battle report for my recent Skaven v. Tomb Kings - lots of stuff going on at the moment, as well as putting it all together in Battle Chronicler, so I haven't got much further than just getting the army lists posted!

By the way, if you ever need to create a battle report for WH40K or WFB (or any tabletop system actually) and If you don't know Battle Chronicler you owe it to yourself to check it out. (FYI: I have no connection with site or the creator.)

Now there are a few bugs apparently, and I think it is for PC not Mac. Also, it is a bit difficult to see if there is any recent activity on the site, but still, really cool.

To the creator of Battle Chronicler...
...The Chattering Horde salutes you!

Despite note having gone very far with my battle report, I did find time just to review and update the painting guides here on the site. It took a bit of time, but I have now added links on all the old guides to my conversion chart and GW's conversion chart with a note about the new paints.

As I was doing that, I noticed that I have 27 guides now (and I still have to do a few more!). To be honest, I don't have time to go through all of them and totally rewrite everything regarding the colours (or even add the new colour next to the old colour in every instance.)

I hope the guides are still useful though!