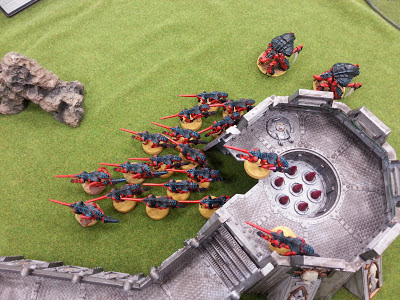 
First Black Templar Battles. A couple of games of 40K...

I used my (bought-painted) Black Templars as my main force, with Tau allies, for the first time in two games against my regular Tyranid opponent. Neither of us had played 6th edition before. 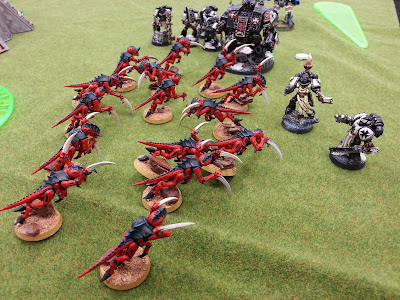 My lists are below. My reasonings for going with these were:
a.) Using Black Templars as something different - I had only used Tau before this.
b.) Tau allies to help with Horde army crowd control. My regular opponent plays mainly as Nids and Orks. The Hammerhead sub-munition and Commander's Airbursting Fragmentation Launcher help out with that, and the Crisis suit Missile Pod Launcher can help crack open 'Nid monstrous creatures or smaller Ork vehicles.

Here is the list: (every chance there are errors here!)

So, in both games played, there were a couple of things that came to the fore for me from losing:

1.) I have no idea how to play a Close Combat oriented army! After all I have spent the last couple of years as a Tau commander trying to stay OUT OF close combat. I really need to get the hang of timing charges with the Black Templars...

2.) My dice still suck. (BOTH outings in CC I rolled an abysmal hand for the Emperor's Champion. Would you believe triple ones to hit?) Lol! :-)

3.) Playing with a different force really means you have to be careful with rules. I was so focused on everything else that I totally forgot about the BTs having to do a leadership check and consolidate towards the nearest enemy if they take any casualties to ranged fire.
(It wouldn't have made any difference though. When my Crusaders got caught in the open after their Rhino popped, the Twin-Linked Devourers on the - I think - Hive Tyrant destroyed the entire unit in one round of shooting.)

4.) The Land Speeder Typhoon is an absolute beast. Heavy Bolter AND missile launcher at 70 points? Can fire both due to new skimmer rules? Sign me up for these...they were blowing away 'Nids like nobody's business!

5.) Neophytes make really handy meat shields. With the new rules about removing casualties these guys should always be in front.

7.) "Focus on the Candy!" just as before, stay focused on those mission objectives - that is what wins the game! (Playing a new army it is too easy to lose sight of that as you wrestle with new rules etc.)

Just 'coz it is New Year, here are a few more pics: 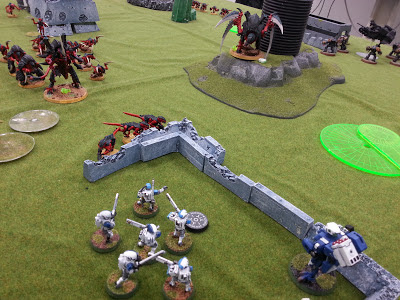