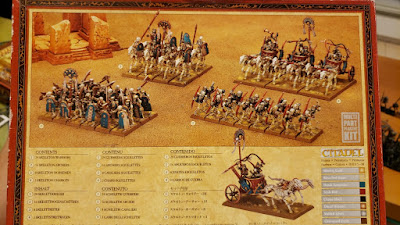 After finishing up the Warcry Starter set (two warbands and terrain) I decided to delve into my Warhammer box and see what I could pull out as a next project.  This box consists of armies that I purchased over the years from ebay, and bits and pieces that ebay sellers had thrown in with other purchases as I got into painting High Elves and Skaven some years ago.

Lo and behold, from the dusty sands of the back of my closet (actually just...dust) emerged an army that I always thought was really aesthetically pleasing, but which I never got around to painting...

With the very kindly help of multiple people on the Warhammer group in Reddit, it appears that yes, I have enough to make a small army that could be fun to play. As I only play friendly games, I could probably also stay on square bases (ducks for cover...)

Here is what it looks like (sorry for the bad pictures). Note that there is plenty of conversion work to be done (and no shields are attached as I will paint these separately for convenience.)


I also have (but can't use for AOS):
X1 metal screaming skull catapult (metal, unassembled)

Finally I have an additional X4 skeleton horses x4 skeleton archers and X1 metal skeleton barricade model from an old limited edition release (Harry the Hammer) that I came by. If I can get the bits for another skeleton horse I could probably kitbash the archers into riders and replace their bow arms with spears/ lances.

I'm looking forward to taking these on in a time-saving fashion, so will probably go with spray undercoat and Contrast paints. Already my mind is turning towards seeing how I could get up to 1,500 points relatively easily and add some Oooomph:

-Arkhan the Black?
-Another necromancer and a block of skeletons?