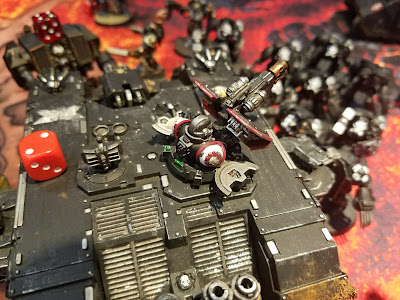 I got in my first two games of Warhammer 40K 8th edition over the last two weeks.

My first game with the new system was at a Games Workshop store in Tokyo (yes, I still never call them "Warhammer Stores", no matter what the sign on the shop says!). I thought it would be good to have a game with the staff to get used to some of the new mechanics, and to help refresh my knowledge of the game as I haven't played in months.

Before I went I spent some time putting together a Black Templars list using the new "Power level" system. This is designed to be a quick and easy way to put together an army without worrying about calculating the exact points value of everything. Each unit has a clearly marked power level, which is adjusted based on the number of models in the unit, but not on their wargear or accessories.

Overall, this system works quite well in specific circumstances, and I was able to pull together a bunch of my old Templars models with relative ease. It makes calculation pretty easy, and various list building apps have already included it. (I used Battlescribe and this seemed to work fine). In a few minutes of playing around I put together a 75 point army of Black Templars (50 points is about 1,000 points according to some sources). More on that later.


My opponent had about 70 points of Ultramarines. From what I remember:

If I can, I'll put together a separate report in more detail, but the highlight of the game had to be my excitement at using Chaplain Grimaldus, only for him to kill himself in his first shot of the game when his pistol overheated and exploded in his face.
Classic WH40K Bittersweet moment™!

My opponent was the underdog in terms of points, but his large Terminator squad pretty much made mincemeat of my troops. That, coupled with some bad placing of charging bikes on my part opened them up to a lot of attacks that overwhelmed them.


In my second game (this time with a friend at home) my list was a little different:


We played an "Open Play" game to get a hang of the basic rules, using just the Indexes.

There were four objectives, and points for control of each objective were collected at the end of each player turn. There is no 8th Tyranid Codex available at the time we played, and I don't have the SM Codex. Even if I know the rules, I didn't feel it would have been right to have access to my Chapter Tactics if my opponent didn't have any info from a codex of his own, so we didn't use those.

I ended up losing this game as well!

This loss was my fault too though for sure, with plenty of bad choices on my part:


Because vehicles are more durable in 8th, being more confident about this is probably a key takeaway.

Having been slaughtered by some Terminators in my first game, I had put a small squad into this game and they worked quite well. Those 2+ saves make a huge difference, even under quite a weight of attacks. After his compatriots were struck down, the Terminator Sergeant duked it out with the Hive Tyrant and brought him down with a thunder hammer (only then to face the wrath of the Carnifex...)

Another positive was to see how the Sternguard did with their combi-flamers. After moving up, they quickly crisped a unit of Genestealers with no problems (but then fell to all that dakka from the HT and Carnifex.) Flamers = Fun (although somehow, I miss templates...)


To finish, here are a few takeaways of main mechanics (mainly confirming what I have read elsewhere.)

It won't satisfy players who like to carefully calculate everything, or gamers interested in "Match play" style games where opponents want very evenly balanced points, but for putting together a quick "pick-up list" it does the job...
...as long as you accept there will be imbalances.

Depending on the army, some decent war gear or other options will slip in, and according to some reports, these could make make for an actual points difference of a couple of hundred "match play" points.

Yes, the game is more enjoyable with simplified shooting, wounding and saving. It will make things faster and easier for most gamers, and especially casual gamers (like me.)

With my dice rolls, I feel like I need to take flamers en masse. The D6 automatic hits sounds good, but with just one in a unit, that could just be one hit (for me at least!)

Mixed bag! Great to have all the rules for a unit in one place. Not so great if you don't keep a close eye on where the dataslates are (or if you have an army with a load of units.)

Thanks to both my opponents for the games. I'm looking forward to using 8th edition more than 7th because I think the overall simplification of the game suits me as a gamer.