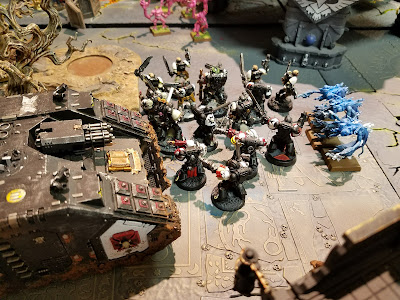 So I headed over to one of my local Games Workshop Warhammer stores for a New Year's game of 40K. This was my first trip to the Harajuku shop in Tokyo, and I enjoyed stepping into a GW as it is something I rarely do - even rarer that I play a game on site.

My opponent and I had previously agreed 1,500 points. I decided to take Black Templars, and he brought Daemons. Not having played a game in ages, I took a very standard list that I had read about online as it matched the models that I have (and I really didn't have any idea about my opponent's models or list).

TL:DR
In a game of Purge the Alien I got crushed and we called it at the 5th.

The plan was simple:

So what went wrong?

a.) I didn't get stuck in and stayed on my side of the board with my LRC and big CC squad, effectively wasting them for most of the game!
b.) Relying on my guns to whittle down the enemy was a mistake. Sure I had plenty of Typhoon missile launchers and cannon support from the LRC but I just didn't manage to finish off some units.
c.) Without taking advantage of the Black Templar Chapter tactics, a regular Crusader squad is going to struggle in CC, and a Chaplain is no wrecking ball!
d.) Multiple flamers make short work of Space Marines.

Dreadnought Brother Marius had a fortunate Drop Pod arrival, not going where I wanted, but still managing to block the center of the board and take down a fair number of daemons before being destroyed.

A squad of Sternguard drop onto the table to high ground, but their poisoned weapons fail to do any damage to one of the larger Daemons (bad luck? Or was this ordained?)
When I decided to disembark my big Templar squad, I intended to move into close combat and then leapfrog from that into the next Daemon unit. However, I failed the charge miserably, leaving the squad out in the open.
This allowed them to be surrounded by flamers. A unit of three appeared....

...then one more at top (a big one!) and the remaining flamer from another unit (at bottom.) Under all of these flamer attacks, the squad got roasted!

Despite being tabled, I had a good time. My opponent was friendly and patient, and we had some good laughs at fate and dice rolls (I rolled x4 ones at least once, but some other good rolls too).

p.s. If you are ever in the Harajuku area, don't hesitate to drop into the Warhammer store there. Although very small, it has very friendly staff, a decent selection of items, and a small gaming area in the main shop too. (Also, it is only a few minutes walk from the station.)
Posted by Oddjob at 12:22 PM