Tampering with the Templars?

Hmmm, interested to see a post today over at Bell of Lost Souls with a snippet of BT information from the new Space Marine Codex, this time about Chapter Tactics in the new book. Looks like some changes?

If nothing else, it is good to see the Black Templars listed there.

There was a lot of wailing and gnashing of teeth in the run up to the last Marines book, with everyone wondering what would happen - would the Templars disappear entirely? That turned out not to be the case, despite some changes. Although I have only used them a few times, they are turning into one of my favorite armies. That COULD be because I only started with them in the most recent edition so the changes didn't make much impact on me. The way I see it though, even if there are some rules changes, you still get to kit them out with with chainswords and run (or wheel) them across the field.

Looking forward to getting my hands on the Codex...
... The printed version that is!
(I won't make the same mistake I did last year in getting the PDF version. It simply wasn't as accessible as the iBook/ Apple version, sadly.) 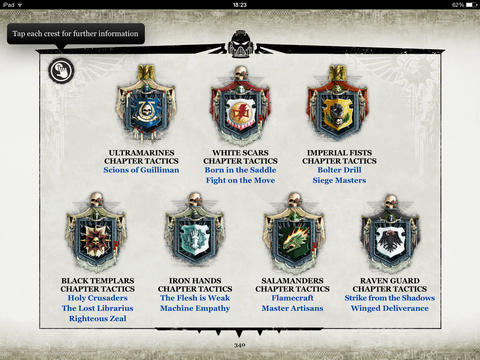