Templars for the New Year.

Not going to be able to get in any gaming or painting time over the holiday season unfortunately, and that is a REAL shame, as thanks to the generosity of some family members I was able to order some models on ebay. 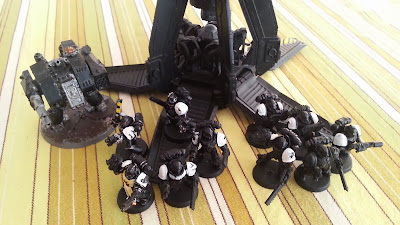 As you can see here, this haul included a Drop Pod and a set of ten marines (approx half with bolt pistol and close combat weapon) and also a Dreadnought (a separate purchase). Everthing I read seems to indicate that to get across the table, some kind of distraction in the enemy backfield is going to be necessary, and one way to do that is with drop pods. I only have one at the moment, but I didn't want to go over budget...

I also picked up a load of Sternguard veteran parts (not shown) from some separate sellers, because I really liked the idea of how flexible they can be because of their access to different ammunication types (as outlined on this truly excellent post over at Dakka Dakka by Sir Arun - I nod respectfully to you sir!)

These additions should help me have a more flexible army. Over time, I will pick up more drop pods, but this is a good start. I'm going to have to stop acquiring, and start painting more, as once the Sternguard get here I really will have quite a backlog to clear, as shown by the image below. 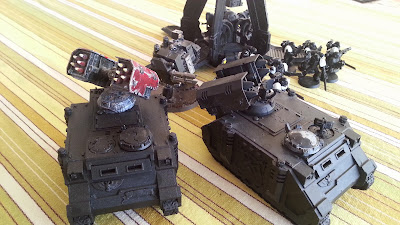 As well as the new units I bought most recently, I still have to paint the two Whirlwind units I have. Although my opponents here won't mind me proxying them "as is", I'd like to add some parts so they can be played as Anti Air units too (or at least look a bit more like AA units!)

It is the end of the Hobby year for me, and overall, it has been a good year.

As I have exclusively been a Tau player to date, it is quite a different ball game getting my head around Space Marines and the different units and play styles they have (although, for the aesthetic alone, Tau will probably always be my favorite.) As I don't get to play often, I am only at the beginning of understanding how to use the Space Marines, but it is still refreshing to try a new army.

I only wish I had time to play more games (of either 40K or WFB). Still, being gainfully employed allows me to feed my habit, even if it precludes me from playing very often. It has also been an adventurous year in terms of painting (at least for me) because I tried some new techniques and overall I was quite pleased with the results.
The Tau Riptide model was my first try at a diorama and some weathering techniques, and the armoured units in my Black Templars were a good test bed for getting my hands dirty with mud (and more weathering!)

Here is hoping for more time next year for more painting and gaming adventures.

I'll finish by wishing everyone in the gaming world (or actually, the world in general!)  all the best for 2014 - may the Dice Gods be on your side...
Play fair and Roll well!