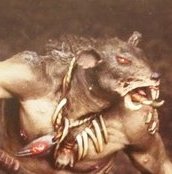 He has arrived...the great lord that my army has been waiting for! I have magic, I have war-machines, I have muscle, and now, NOW I have otherworldly EVIL as well!
(Insert high-pitched - yet still evil - laugh here!)

...or at least I have a model that COULD stand-in as that embodiment of Skaven evil, the scheming Vermin Lord.


I first came across Scar-Scath, Fiend of Vermin, from a post on another blog, and since then have visited the Bane Legions website several times. The models look great and could well accompany any number of different armies, and the range is expanding, with monsters ranging from tree-men to giants. I determined to buy Scar-Scath, as I thought he might be a really good centerpiece for my Skaven army, striding tall among the bent-backed, scurrying Skaven horde around him, massive polearm in hand.

I recently ordered the model from Maelstrom Games and a box duly arrived from the UK while I was on a business trip. I was really happy to get back and see the box there, not least because anything coming in the post from the UK by Royal Mail makes me worry. (Even worse if it is Parcel Force....Parcel FARCE more like) Note that isn't a slight on Maelstrom (I could choose a safer more expensive shipping option if I wish!), just my fears based on prior experience with the UK postal system.

Anyway, the box did arrive, and in perfect shape too! So what is in it? 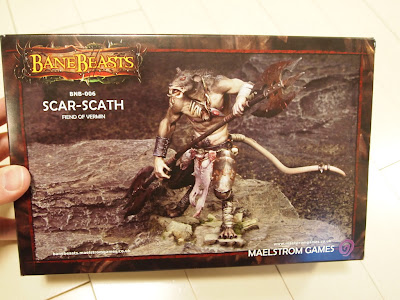 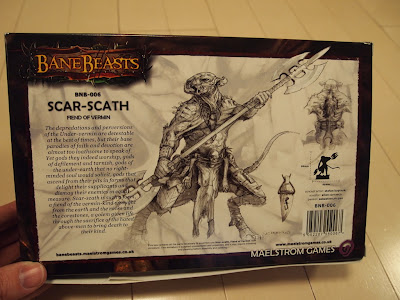 The pieces are really clearly defined with lots of detail. The one thing I don't quite understand is that there was no base for the model in the box. Is it the case that with resin models people just always want to sculpt and create their own? Perhaps I missed where it said that on the website? It seems a bit strange as the foot (on the right in the picture) looks as though it has a rod molded for insertion in a hole on a base. I guess I will have to find one somewhere...

After getting out the model and making sure nothing was broken I decided to put Scar-Skath next to one of my Skaven to see how he looked in terms of size. Although Maelstrom have helpfully put sizes (H:84mm x W:96mm) on their site next to pictures of each model (so I had a rough idea) I was definitely nervous as I put him next to a Warlock Engineer for comparison. Would he look ridiculously large? or not impressive enough? 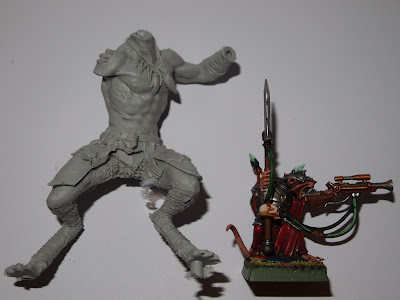 Yes, he IS rather large (and will look larger with the head on and when carrying the polearm) but I actually think he is going to look just about right! Not a giant - more a very large and powerful manifestation of a summoned being.

Now the challenge is just to assemble and paint my first ever resin figure!